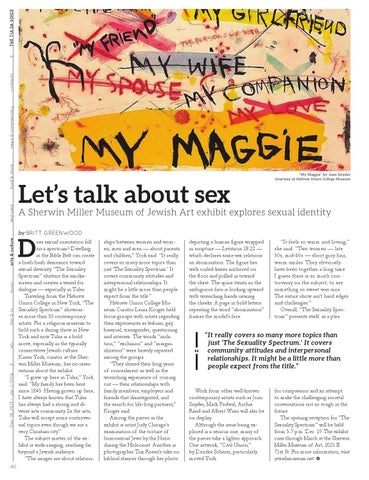 oes sexual orientation fall on a spectrum? Dwelling in the Bible Belt can create a hush-hush demeanor toward sexual diversity. “The Sexuality Spectrum” shatters the smokescreen and creates a vessel for dialogue — especially in Tulsa. Traveling from the Hebrew Union College in New York, “The Sexuality Spectrum” showcases more than 50 contemporary artists. For a religious museum to hold such a daring show in New York and now Tulsa is a bold move, especially in the typically conservative Jewish culture. Karen York, curator at the Sherwin Miller Museum, has no reservations about the exhibit. “I grew up here in Tulsa,” York said. “My family has been here since 1845. Having grown up here, I have always known that Tulsa has always had a strong and diverse arts community. In the arts, Tulsa will accept some controversial topics even though we are a very Christian city.” The subject matter of the exhibit is wide-ranging, reaching far beyond a Jewish audience. “The images are about relation-

ships between women and women, men and men — about parents and children,” York said. “It really covers so many more topics than just ‘The Sexuality Spectrum.’ It covers community attitudes and interpersonal relationships. It might be a little more than people expect from the title.” Hebrew Union College Museum Curator Laura Kruger held focus groups with artists regarding their experiences as lesbian, gay, bisexual, transgender, questioning and intersex. The words “isolation,” “exclusion” and “marginalization” were heavily repeated among the groups. “They shared their long years of concealment as well as the wrenching experience of coming out — their relationships with family members, employers and friends that disintegrated; and the search for life-long partners,” Kruger said. Among the pieces in the exhibit is artist Judy Chicago’s examination of the torture of homosexual Jews by the Nazis during the Holocaust. Another is photographer Trix Rosen’s take on biblical stances through her photo

depicting a human figure wrapped in scripture — Leviticus 18:22 — which declares same-sex relations an abomination. The figure lies with curled knees anchored on the floor and pulled in toward the chest. The spine twists so the ambiguous face is looking upward with wrenching hands nearing the cheeks. A page in bold letters repeating the word “abomination” frames the model’s face.

“It feels so warm and loving,” she said. “Two women — late 50s, mid-60s — short gray hair, warm smiles. They obviously have been together a long time. I guess there is so much controversy on the subject, to see something so sweet was nice. The entire show isn’t hard edges and challenges.” Overall, “The Sexuality Spectrum” presents itself as a plea

“ It really covers so many more topics than just ‘The Sexuality Spectrum.’ It covers community attitudes and interpersonal relationships. It might be a little more than people expect from the title.”

Work from other well-known contemporary artists such as Joan Snyder, Mark Podwal, Archie Rand and Albert Winn will also be on display. Although the issue being explored is a serious one, many of the pieces take a lighter approach. One artwork, “Civil Union,” by Deirdre Scherer, particularly moved York.

for compassion and an attempt to make the challenging societal conversations not so tough in the future. The opening reception for “The Sexuality Spectrum” will be held from 5-7 p.m. Dec. 19. The exhibit runs through March at the Sherwin Miller Museum of Art, 2021 E. 71st St. For more information, visit jewishmuseum.net. 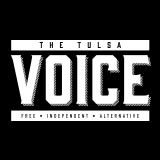