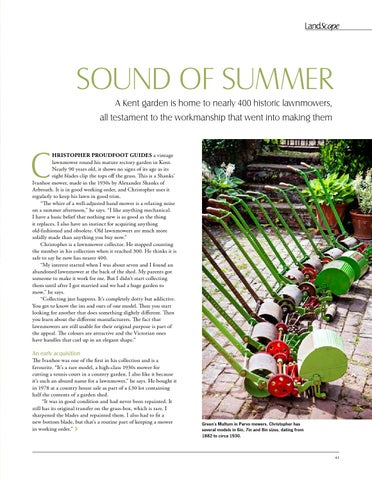 SOUND OF SUMMER A Kent garden is home to nearly 400 historic lawnmowers, all testament to the workmanship that went into making them

HRISTOPHER PROUDFOOT GUIDES a vintage lawnmower round his mature rectory garden in Kent. Nearly 90 years old, it shows no signs of its age as its eight blades clip the tops off the grass. This is a Shanks’ Ivanhoe mower, made in the 1930s by Alexander Shanks of Arbroath. It is in good working order, and Christopher uses it regularly to keep his lawn in good trim. “The whirr of a well-adjusted hand mower is a relaxing noise on a summer afternoon,” he says. “I like anything mechanical. I have a basic belief that nothing new is as good as the thing it replaces. I also have an instinct for acquiring anything old-fashioned and obsolete. Old lawnmowers are much more solidly made than anything you buy now.” Christopher is a lawnmower collector. He stopped counting the number in his collection when it reached 300. He thinks it is safe to say he now has nearer 400. “My interest started when I was about seven and I found an abandoned lawnmower at the back of the shed. My parents got someone to make it work for me. But I didn’t start collecting them until after I got married and we had a huge garden to mow,” he says. “Collecting just happens. It’s completely dotty but addictive. You get to know the ins and outs of one model. Then you start looking for another that does something slightly different. Then you learn about the different manufacturers. The fact that lawnmowers are still usable for their original purpose is part of the appeal. The colours are attractive and the Victorian ones have handles that curl up in an elegant shape.” An early acquisition The Ivanhoe was one of the first in his collection and is a favourite. “It’s a rare model, a high-class 1930s mower for cutting a tennis court in a country garden. I also like it because it’s such an absurd name for a lawnmower,” he says. He bought it in 1978 at a country house sale as part of a £30 lot containing half the contents of a garden shed. “It was in good condition and had never been repainted. It still has its original transfer on the grass-box, which is rare. I sharpened the blades and repainted them. I also had to fit a new bottom blade, but that’s a routine part of keeping a mower in working order.” ›

Green’s Multum in Parvo mowers. Christopher has several models in 6in, 7in and 8in sizes, dating from 1882 to circa 1930. LandScape magazine celebrates the joy of the garden, simple seasonal recipes, traditional British crafts and the wonder of nature and the co...

LandScape magazine celebrates the joy of the garden, simple seasonal recipes, traditional British crafts and the wonder of nature and the co...