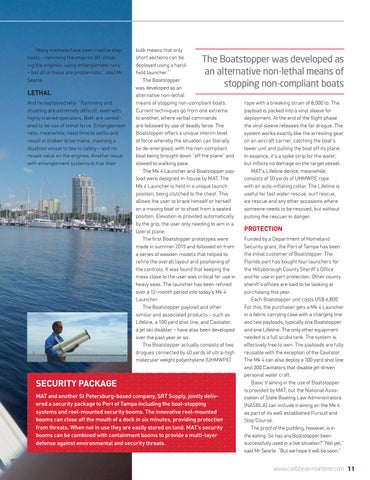 “Many methods have been tried to stop boats – ramming the engines off, shooting the engines, using entanglement nets – but all of these are problematic,” said Mr Searle.

LETHAL And he explained why: “Ramming and shooting are extremely difficult, even with highly trained operators. Both are considered to be use of lethal force. Entanglement nets, meanwhile, need time to settle and result in broken drive trains, meaning a disabled vessel to tow to safety – and no resale value on the engines. Another issue with entanglement systems is that their

bulk means that only short sections can be deployed using a handheld launcher.” The Boatstopper was developed as an alternative non-lethal means of stopping non-compliant boats. Current techniques go from one extreme to another, where verbal commands are followed by use of deadly force. The Boatstopper offers a unique interim level of force whereby the situation can literally be de-energised, with the non-compliant boat being brought down “off the plane” and slowed to walking pace. The Mk 4 Launcher and Boatstopper payload were designed in-house by MAT. The Mk 4 Launcher is held in a unique launch position, being clutched to the chest. This allows the user to brace himself or herself on a moving boat or to shoot from a seated position. Elevation is provided automatically by the grip, the user only needing to aim in a lateral plane. The first Boatstopper prototypes were made in summer 2015 and followed on from a series of wooden models that helped to refine the overall layout and positioning of the controls. It was found that keeping the mass close to the user was critical for use in heavy seas. The launcher has been refined over a 12-month period into today’s Mk 4 Launcher. The Boatstopper payload and other similar and associated products – such as Lifeline, a 100 yard shot line, and Cavitator, a jet ski disabler – have also been developed over the past year or so. The Boatstopper actually consists of two drogues connected by 40 yards of ultra-high molecular weight polyethylene (UHMWPE)

SECURITY PACKAGE MAT and another St Petersburg-based company, SRT Supply, jointly delivered a security package to Port of Tampa including the boat-stopping systems and reel-mounted security booms. The innovative reel-mounted booms can close off the mouth of a dock in six minutes, providing protection from threats. When not in use they are easily stored on land. MAT’s security booms can be combined with containment booms to provide a multi-layer defense against environmental and security threats.

rope with a breaking strain of 8,000 lb. The payload is packed into a vinyl sleeve for deployment. At the end of the flight phase the vinyl sleeve releases the far drogue. The system works exactly like the arresting gear on an aircraft carrier, catching the boat’s lower unit and pulling the boat off its plane. In essence, it’s a spike strip for the water, but inflicts no damage on the target vessel. MAT’s Lifeline device, meanwhile, consists of 50 yards of UHMWPE rope with an auto-inflating collar. The Lifeline is useful for fast water rescue, surf rescue, ice rescue and any other occasions where someone needs to be rescued, but without putting the rescuer in danger.

PROTECTION Funded by a Department of Homeland Security grant, the Port of Tampa has been the initial customer of Boatstopper. The Florida port has bought four launchers for the Hillsborough County Sheriff’s Office and for use in port protection. Other county sheriff’s offices are said to be looking at purchasing this year. Each Boatstopper unit costs US$ 6,800. For this, the purchaser gets a Mk 4 Launcher in a fabric carrying case with a charging line and two payloads, typically one Boatstopper and one Lifeline. The only other equipment needed is a full scuba tank. The system is effectively free to own. The payloads are fully reusable with the exception of the Cavitator. The Mk 4 can also deploy a 100 yard shot line and 300 Cavitators that disable jet-driven personal water craft. Basic training in the use of Boatstopper is provided by MAT; but the National Association of State Boating Law Administrators (NASBLA) can include training on the Mk 4 as part of its well established Pursuit and Stop Course. The proof of the pudding, however, is in the eating. So has any Boatstopper been successfully used in a live situation? “Not yet,” said Mr Searle. “But we hope it will be soon.” 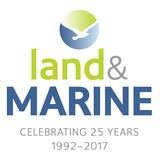