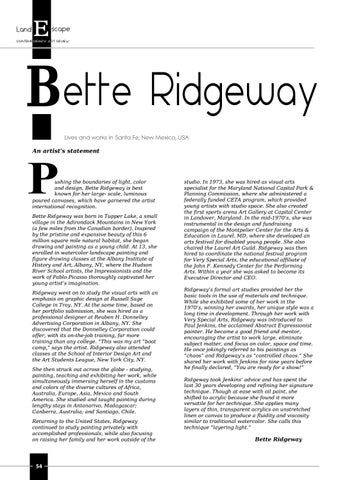 ushing the boundaries of light, color and design, Bette Ridgeway is best known for her large- scale, luminous poured canvases, which have garnered the artist international recognition. Bette Ridgeway was born in Tupper Lake, a small village in the Adirondack Mountains in New York (a few miles from the Canadian border). Inspired by the pristine and expansive beauty of this 6 million square mile natural habitat, she began drawing and painting as a young child. At 13, she enrolled in watercolor landscape painting and figure drawing classes at the Albany Institute of History and Art, Albany, NY, where the Hudson River School artists, the Impressionists and the work of Pablo Picasso thoroughly captivated her young artist’s imagination. Ridgeway went on to study the visual arts with an emphasis on graphic design at Russell Sage College in Troy, NY. At the same time, based on her portfolio submission, she was hired as a professional designer at Reuben H. Donnelley Advertising Corporation in Albany, NY. She discovered that the Donnelley Corporation could offer, with its on-the-job training, far more training than any college. “This was my art “boot camp,” says the artist. Ridgeway also attended classes at the School of Interior Design Art and the Art Students League, New York City, NY. She then struck out across the globe - studying, painting, teaching and exhibiting her work, while simultaneously immersing herself in the customs and colors of the diverse cultures of Africa, Australia, Europe, Asia, Mexico and South America. She studied and taught painting during lengthy stays in Antanarivo, Madagascar; Canberra, Australia; and Santiago, Chile. Returning to the United States, Ridgeway continued to study painting privately with accomplished professionals, while also focusing on raising her family and her work outside of the

studio. In 1973, she was hired as visual arts specialist for the Maryland National Capital Park & Planning Commission, where she administered a federally funded CETA program, which provided young artists with studio space. She also created the first sports arena Art Gallery at Capital Center in Landover, Maryland. In the mid-1970’s, she was instrumental in the design and fundraising campaign of the Montpelier Center for the Arts & Education in Laurel, MD, where she developed an arts festival for disabled young people. She also chaired the Laurel Art Guild. Ridgeway was then hired to coordinate the national festival program for Very Special Arts, the educational affiliate of the John F. Kennedy Center for the Performing Arts. Within a year she was asked to become its Executive Director and CEO. Ridgeway’s formal art studies provided her the basic tools in the use of materials and technique. While she exhibited some of her work in the 1970’s, winning her awards, her unique style was a long time in development. Through her work with Very Special Arts, Ridgeway was introduced to Paul Jenkins, the acclaimed Abstract Expressionist painter. He became a good friend and mentor, encouraging the artist to work large, eliminate subject matter, and focus on color, space and time. He once jokingly referred to his paintings as “chaos” and Ridgeway’s as “controlled chaos.” She shared her work with Jenkins for nine years before he finally declared, “You are ready for a show!” Ridgeway took Jenkins’ advice and has spent the last 30 years developing and refining her signature technique. Though at ease with oil paint, she shifted to acrylic because she found it more versatile for her technique. She applies many layers of thin, transparent acrylics on unstretched linen or canvas to produce a fluidity and viscosity similar to traditional watercolor. She calls this technique “layering light.”