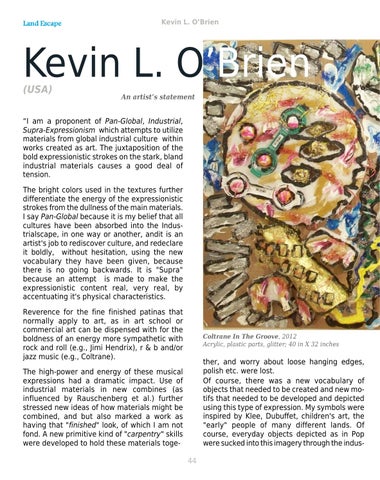 “I am a proponent of Pan-Global, Industrial, Supra-Expressionism which attempts to utilize materials from global industrial culture within works created as art. The juxtaposition of the bold expressionistic strokes on the stark, bland industrial materials causes a good deal of tension. The bright colors used in the textures further differentiate the energy of the expressionistic strokes from the dullness of the main materials. I say Pan-Global because it is my belief that all cultures have been absorbed into the Industrialscape, in one way or another, andit is an artist&#39;s job to rediscover culture, and redeclare it boldly, without hesitation, using the new vocabulary they have been given, because there is no going backwards. It is &quot;Supra&quot; because an attempt is made to make the expressionistic content real, very real, by accentuating it&#39;s physical characteristics. Reverence for the fine finished patinas that normally apply to art, as in art school or commercial art can be dispensed with for the boldness of an energy more sympathetic with rock and roll (e.g., Jimi Hendrix), r &amp; b and/or jazz music (e.g., Coltrane).

ther, and worry about loose hanging edges, polish etc. were lost. Of course, there was a new vocabulary of objects that needed to be created and new motifs that needed to be developed and depicted using this type of expression. My symbols were inspired by Klee, Dubuffet, children&#39;s art, the &quot;early&quot; people of many different lands. Of course, everyday objects depicted as in Pop were sucked into this imagery through the indus-

The high-power and energy of these musical expressions had a dramatic impact. Use of industrial materials in new combines (as influenced by Rauschenberg et al.) further stressed new ideas of how materials might be combined, and but also marked a work as having that &quot;finished&quot; look, of which I am not fond. A new primitive kind of &quot;carpentry&quot; skills were developed to hold these materials toge44

submit your artworks to landescape@artlover.com 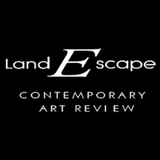