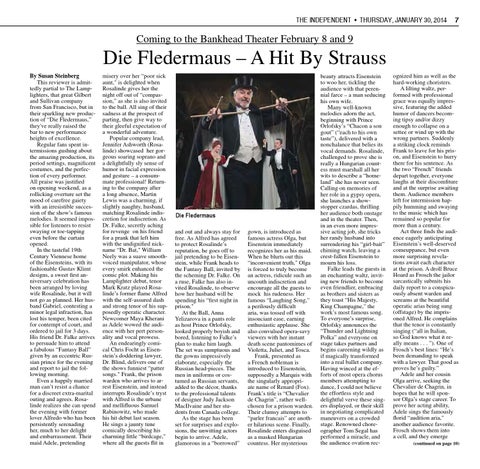 Coming to the Bankhead Theater February 8 and 9

Die Fledermaus – A Hit By Strauss By Susan Steinberg This reviewer is admittedly partial to The Lamplighters, that great Gilbert and Sullivan company from San Francisco, but in their sparkling new production of “Die Fledermaus,” they've really raised the bar to new performance heights of excellence. Regular fans spent intermissions gushing about the amazing production, its period settings, magnificent costumes, and the perfection of every performer. All praise was justified on opening weekend, as a rollicking overture set the mood of carefree gaiety with an irresistible succession of the show’s famous melodies. It seemed impossible for listeners to resist swaying or toe-tapping even before the curtain opened. In the tasteful 19th Century Viennese home of the Eisensteins, with its fashionable Gustav Klimt designs, a sweet first anniversary celebration has been arranged by loving wife Rosalinde, but it will not go as planned. Her husband Gabriel, contesting a minor legal infraction, has lost his temper, been cited for contempt of court, and ordered to jail for 3 days. His friend Dr. Falke arrives to persuade him to attend a fabulous “Fantasy Ball” given by an eccentric Russian prince for the evening and report to jail the following morning. Even a happily married man can’t resist a chance for a discreet extra-marital outing and agrees. Rosalinde realizes she can spend the evening with former lover Alfredo who has been persistently serenading her, much to her delight and embarrassment. Their maid Adele, pretending

misery over her “poor sick aunt," is delighted when Rosalinde gives her the night off out of “compassion,” as she is also invited to the ball. All sing of their sadness at the prospect of parting, then give way to their gleeful expectation of a wonderful adventure. Popular company lead, Jennifer Ashworth (Rosalinde) showcased her gorgeous soaring soprano and a delightfully sly sense of humor in facial expression and gesture – a consummate professional! Returning to the company after a long absence, Martin Lewis was a charming, if slightly naughty, husband, matching Rosalinde indiscretion for indiscretion. As Dr. Falke, secretly aching for revenge on his friend for a prank that left him with the undignified nickname “Dr. Bat," William Neely was a suave smoothvoiced manipulator, whose every smirk enhanced the comic plot. Making his Lamplighter debut, tenor Mark Kratz played Rosalinde’s former flame Alfred with the self-assured dash and strong tenor of his supposedly operatic character. Newcomer Maya Kherani as Adele wowed the audience with her pert personality and vocal prowess. An endearingly comical Chris Focht as Eisenstein’s doddering lawyer, Dr. Blind, delivers one of the shows funniest “patter songs." Frank, the prison warden who arrives to arrest Eisenstein, and instead interrupts Rosalinde’s tryst with Alfred is the urbane and mellifluous Samuel Rabinowitz, who made his hit debut last season. He sings a jaunty tune comically describing his charming little “birdcage," where all the guests flit in

Die Fledermaus and out and always stay for free. As Alfred has agreed to protect Rosalinde’s reputation, he goes off to jail pretending to be Eisenstein, while Frank heads to the Fantasy Ball, invited by the scheming Dr. Falke. On a ruse, Falke has also invited Rosalinde, to observe how her husband will be spending his “first night in prison." At the Ball, Anna Yelizarova in a pants role as host Prince Orlofsky, looked properly boyish and bored, listening to Falke’s plan to make him laugh. The set was sumptuous and the gowns impressively elaborate, especially the Russian head-pieces. The men in uniforms or costumed as Russian servants, added to the décor, thanks to the professional talents of designer Judy Jackson MacIlvaine and her students from Canada college. As the stage has been set for surprises and explosions, the unwitting actors begin to arrive. Adele, glamorous in a “borrowed”

gown, is introduced as famous actress Olga, but Eisenstein immediately recognizes her as his maid. When he blurts out this “inconvenient truth," Olga is forced to truly become an actress, ridicule such an uncouth indiscretion and encourage all the guests to mock his rudeness. Her famous “Laughing Song," a perilously difficult aria, was tossed off with insouciant ease, earning enthusiastic applause. She also convulsed opera-savy viewers with her instant death scene pantomimes of Violetta, Juliet, and Tosca. Frank, presented as a French nobleman is introduced to Eisenstein, supposedly a Marquis with the singularly appropriate name of Renard (Fox). Frank’s title is “Chevalier de Chagrin”, rather wellchosen for a prison warden. Their clumsy attempts to “parler francais” are another hilarious scene. Finally, Rosalinde enters disguised as a masked Hungarian countess. Her mysterious

beauty attracts Eisenstein to woo her, tickling the audience with that perennial farce – a man seducing his own wife. Many well-known melodies adorn the act, beginning with Prince Orlofsky’s “Chacon a son gout” (“each to his own taste”), delivered with a nonchalance that belies its vocal demands. Rosalinde, challenged to prove she is really a Hungarian countess must marshall all her wits to describe a “homeland” she has never seen. Calling on memories of her role in a gypsy opera, she launches a showstopper czardas, thrilling her audience both onstage and in the theater. Then, in an even more impressive acting job, she tricks her randy husband into surrendering his “girl-bait” chiming watch, leaving a crest-fallen Eisenstein to mourn his loss. Falke leads the guests in an enchanting waltz, inviting new friends to become even friendlier, embracing as brothers and sisters as they toast “His Majesty, King Champagne," the work’s most famous song. To everyone’s surprise, Orlofsky announces the “Thunder and Lightning Polka” and everyone on stage takes partners and begins careening wildly as if magically transformed into a real ballet company. Having winced at the efforts of most opera chorus members attempting to dance, I could not believe the effortless style and delightful verve these singers displayed, or their skill in negotiating complicated maneuvers on a crowded stage. Renowned choreographer Tom Segal has performed a miracle, and the audience ovation rec-

ognized him as well as the hard-working choristers. A lilting waltz, performed with professional grace was equally impressive, featuring the added humor of dancers becoming tipsy and/or dizzy enough to collapse on a settee or wind up with the wrong partners. Suddenly a striking clock reminds Frank to leave for his prison, and Eisenstein to hurry there for his sentence. As the two “French” friends depart together, everyone laughs at their discomfiture and at the surprise awaiting them. Audience members left for intermission happily humming and swaying to the music which has remained so popular for more than a century. Act three finds the audience eagerly anticipating Eisenstein’s well-deserved comeuppance, but even more surprising revelations await each character at the prison. A droll Bruce Hoard as Frosch the jailor sarcastically submits his daily report to a conspicuously absent warden and screams at the beautiful operatic arias being sung (offstage) by the imprisoned Alfred. He complains that the tenor is constantly singing (“all in Italian, so God knows what it really means . . . ”). One of Frosch’s best lines: “He’s been demanding to speak with a lawyer. That good as proves he’s guilty.” Adele and her cousin Olga arrive, seeking the Chevalier de Chagrin, in hopes that he will sponsor Olga’s stage career. To prove her acting ability, Adele sings the famously florid “audition aria," another audience favorite. Frosch shows them into a cell, and they emerge (continued on page 10) 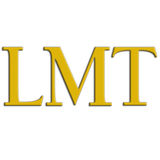