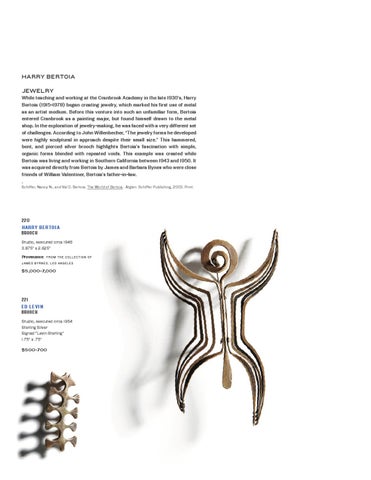 HARRY BERTOIA JEWELRY While teaching and working at the Cranbrook Academy in the late 1930’s, Harry Bertoia (1915-1978) began creating jewelry, which marked his first use of metal as an artist medium. Before this venture into such an unfamiliar form, Bertoia entered Cranbrook as a painting major, but found himself drawn to the metal shop. In the exploration of jewelry-making, he was faced with a very different set of challenges. According to John Willenbecher, “The jewelry forms he developed were highly sculptural in approach despite their small size.” This hammered, bent, and pierced silver brooch highlights Bertoia’s fascination with simple, organic forms blended with repeated voids. This example was created while Bertoia was living and working in Southern California between 1943 and 1950. It was acquired directly from Bertoia by James and Barbara Bynes who were close friends of William Valentiner, Bertoia’s father-in-law. . Schiffer, Nancy N., and Val O. Bertoia. The World of Bertoia. Atglen: Schiffer Publishing, 2003. Print.

FROM THE COLLEC T I O N O F 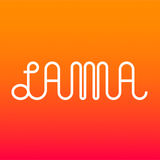 The March 6, 2011 Modern Art & Design auction features Ettore Sottsass designs from the Estate of Max Palevsky. Additional highlights will i...

The March 6, 2011 Modern Art & Design auction features Ettore Sottsass designs from the Estate of Max Palevsky. Additional highlights will i...