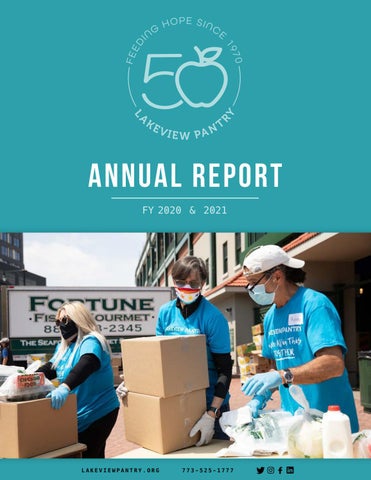 During the past two years, Lakeview Pantry responded to a historic need for food assistance and social services that was unlike any other time in our 50-year existence. Put simply, we could not have risen to the challenge without the outpouring of support from our donors, volunteers and community partners.

We are overwhelmed with gratitude. Thank you for your unflagging compassion and generosity. When the coronavirus pandemic brought society as we know it to a halt, we had to rethink many of our operations in order to keep people safe. To reduce risk of transmitting the virus, we moved away (temporarily) from a well-respected food choice model to prepacked boxes, and rapidly expanded our Home Delivery and Online Market programs to redefine when and how people receive food assistance. We increased our social service and mental wellness services to support an increased number of families in crisis. In many ways, we were prepared. In 2018, we set out to create an ambitious five-year plan that would expand our footprint in Chicago. We planned to expand our programs and operations, engage more stakeholders, and empower more clients. From the beginning, we knew that to achieve all this, we would need to remain proactive and adaptable. In tumultuous times, plans can quickly go out the window. However, thanks to the immense generosity of our donors and volunteers, as well as our partners at various foundations, corporations, schools, religious institutions, and community organizations—our plans did not. Despite the enormous challenges, a true silver lining emerged: People and organizations stepped up and collaborated like never before. Thanks to unique new partners and strong longtime allies, notably the Greater Chicago Food Depository, Lakeview Pantry was able to feed many more thousands of people in the crisis. Friends, we are so proud to share with you that not only did we achieve every single one of our goals in just two years, we surpassed them. This work is far from done. We continue to provide services to far more people than we did before the pandemic. And, as we all know, there were unjust levels of food insecurity in Chicago well before the coronavirus took hold. But with your help, we will continue to grow and evolve as an organization to serve our neighbors in need throughout Chicago. Thank you, as always, for your continued support and for feeding hope, the greatest gift we can give.

people a week throughout Chicago

we Provided more than

88% of our food was donated

Over 2,000 new volunteers stepped up to the plate to pack more than 74,000 boxes at Wrigley Field

“My hours were cut due to COVID and I was worried about me and my kids eating.

More people reached out for help with mental health.

I can’t describe how great this service has been. The food I received saved us from going without.”

who comes for help?

We provided food assistance in collaboration with more than 90 community partners where Lakeview Pantry does not have a physical presence through our Pop-Up Pantry Program.

as need increased, our coverage Expanded to serve greater Chicago

Black and Brown communities, in particular, experienced heightened rates of food insecurity as grocery retailers closed and social unrest increased. Our joint goal remained focused on meeting clients where they were and increasing food access for all Chicago residents. Our ability to move food safely and efficiently aided in our ability to respond immediately.

Lakeview Pantry’s food sourcing strategy went into overdrive during the height of the pandemic, with a 100% increase in what we purchase in a typical year.

Thank You to our Leading In-Kind Donors

We were fortunate to benefit from in-kind food partners, grocers, distributors and farmers, who have helped provide more than 4 million meals annually.

With support from our incredible roster of corporate, foundation and individual donors, Lakeview Pantry reached new heights in serving the Chicago community. Several examples of philanthropy in action below share the story of how we delivered on our strategic plan.

Home Delivery: The Peluchiwski Family helped launch the Pantry’s Senior Pop-Up Pantry which is an extension of the Home Delivery program and brings a mobile pantry and social service programming directly to older adult residential buildings. The Pop-Up Pantry was developed to combat the social isolation and loneliness that many older Americans are at risk of by fostering community within each building. Neighbors help neighbors grocery shop and an on-site case manager is available to address other challenges.

Online Market: The Thierer Family Foundation and the Harry and Jeanette Weinberg Foundation enabled our newly formed Online Market, housed out of our expanded Hub location, to keep up with the incredible 600% growth it experienced at the height of the pandemic. This program was critical for giving clients choice over the food they brought home when coming inside the Pantry to shop was no longer safe. In response to the large increases in demand, the Online Market extended pick-up options to include our Sheridan Market and two partner sites, giving clients more options to access the food they need.

General Operating: When the pandemic hit and Lakeview Pantry saw a 400% increase in need, significant funding came from more than 10 donors who contributed $100K or more (page 9 and 28) to support our COVID response. General Operating funds were vital to the success of our agency as we pivoted programming, expanded our operations to a new location, and added temporary staff to meet the growing needs of our neighbors.

Influx of general donations allowed us to respond to immediate needs

Mental Health &amp; Social Services: With the support of an anonymous donor and the City of Chicago, we expanded our Mental Health Program to the Avondale and Humboldt Park neighborhoods as part of the city&#39;s Network of Trauma Informed Centers of Care. We now have four full time therapists on staff to help meet the growing need for community mental health programs and offer free therapy in three languages: English, Spanish, and Polish. People experiencing food insecurity are at a much higher risk of also experiencing symptoms of depression or anxiety. Lakeview Pantry provides clinical care with a strengths-based perspective to meet the unique needs of each individual and work towards independence.

While responding to a global pandemic, Lakeview Pantry experienced exponential growth and exceeded our strategic goals previously set in 2018. As a result, the Board and Leadership of the organization prioritized refreshing and expanding our strategic plan to guide our strategy for the next three years, helping us build a strong foundation to meet the growing needs of the community.

Thank you for your support! 9

we couldn’t have done it without you! 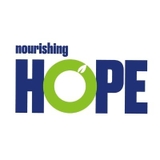