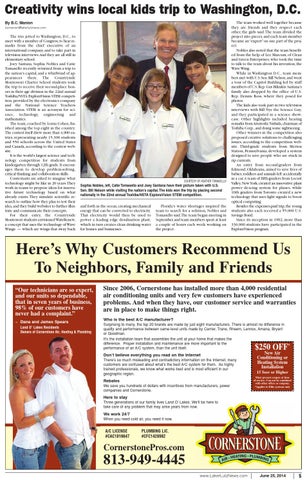 The trio jetted to Washington, D.C., to meet with a member of Congress, to hear remarks from the chief executive of an international company, and to take part in television interviews.And they are all still in elementary school. Joey Santana, Sophia Nobles and Catie Tomasello recently returned from a trip to the nation’s capital, and a whirlwind of appearances there. The Countryside Montessori Charter School students took the trip to receive their second-place honors in their age division in the 22nd annual Toshiba/NSTA ExploraVision STEM competition, provided by the electronics company and the National Science Teachers Association. STEM is an acronym for science, technology, engineering and mathematics. The team, coached by Lorna Cohen, finished among the top eight in the country. The contest itself drew more than 4,900 entries, representing nearly 15,300 students and 550 schools across the United States and Canada, according to the contest website. It is the world’s largest science and technology competition for students from kindergarten through 12th grade. It encourages them to develop problem-solving, critical thinking and collaboration skills. Contestants are asked to imagine what technology might be like in 20 years.They work in teams to propose ideas for innovative future technology based on what already exists. They simulate scientific research to outline how they plan to test their idea, and they build websites to further illustrate and communicate their concepts. For their entry, the Countryside Montessori students envisioned WateRenew, a concept that uses the technology of Wave Wings — which are wings that sway back

and forth in the ocean, creating mechanical energy that can be converted to electricity. That electricity would then be used to power a leading edge desalination plant, which in turn creates clean drinking water for homes and businesses.

Florida’s water shortages inspired the team to search for a solution, Nobles and Tomasello said.The team began meeting in September, and team members spent at least a couple of hours each week working on the project.

The team worked well together because they are friends and they respect each other, the girls said. The team divided the project into pieces, and each team member became an “expert” on one part of the project. Nobles also noted that the team benefited from the help of Lee Marcum, of Clean and Green Enterprises, who took the time to talk to the team about his invention, the Wave Wing. While in Washington D.C., team members met with U.S. Sen. Bill Nelson, and went a tour of the Capitol Building led by staff members of U.S. Rep. Gus Bilirakis. Santana’s family also dropped by the office of U.S. Rep. Dennis Ross, where they posed for photos. The kids also took part in two television interviews with Bill Nye the Science Guy, and they participated in a science showcase. Other highlights included hearing remarks from Atsutoshi Nishida, chairman of Toshiba Corp., and doing some sightseeing. Other winners in the competition also proposed creative solutions to challenging issues, according to the competition website. Third-grade students from Merion Station, Pennsylvania, developed a system designed to save people who are stuck in rip currents. An entry from second-graders from Edmond, Oklahoma, aimed to save lives of babies, toddlers and animals left accidentally in a car.A team of fifth-graders from Locust Valley, New York, created an innovative plant power de-icing system for planes, while 10th graders from Toronto created a new technology that uses light signals to boost optical computing. Besides the expenses-paid trip, the young students also each received a $5,000 U.S. Savings Bond. Since its inception in 1992, more than 330,000 students have participated in the ExploraVision program.

Here’s Why Customers Recommend Us To Neighbors, Family and Friends “Our technicians are so expert, and our units so dependable, that in seven years of business, 98% of our customers have never had a complaint.” ~ Dana and James Spears Land O’ Lakes Residents Owners of Cornerstone Air, Heating & Plumbing

Since 2006, Cornerstone has installed more than 4,000 residential air conditioning units and very few customers have experienced problems. And when they have, our customer service and warranties are in place to make things right. Who is the best A/C manufacturer? Surprising to many, the top 20 brands are made by just eight manufacturers. There is almost no difference in quality and performance between same-level units made by Carrier, Trane, Rheem, Lennox, Amana, Bryant or Goodman. It’s the installation team that assembles the unit at your home that makes the difference. Proper installation and maintenance are more important to the * performance of an A/C system, than the unit itself.

Don’t believe everything you read on the Internet There’s so much misleading and contradictory information on the Internet, many customers are confused about what’s the best A/C system for them. As highly trained professionals, we know what works best and is most efficient in our geographic region.

Rebates We save you hundreds of dollars with incentives from manufacturers, power companies and Cornerstone.

15 Seer or Higher Must present coupon at time of service. Can not be combined with other offers or coupons. *Applies to Elite systems only

Here to stay Three generations of our family lives Land O’ Lakes. We’ll be here to take care of any problem that may arise years from now. 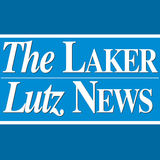 Sheriff, others could lead tax hike; Lutz to sparkle for this year's July 4 celebration; Chef Rigberg is on the kitchen's cutting edge

Sheriff, others could lead tax hike; Lutz to sparkle for this year's July 4 celebration; Chef Rigberg is on the kitchen's cutting edge