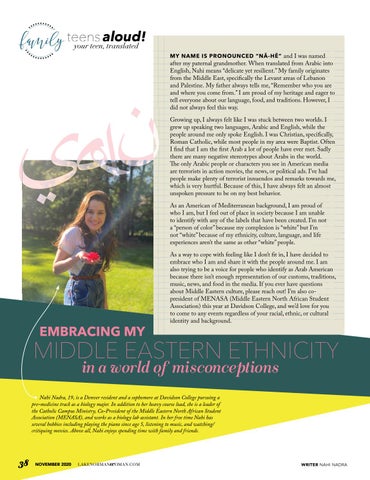 MY NAME IS PRONOUNCED “NĂ-HĒ” and I was named

after my paternal grandmother. When translated from Arabic into English, Nahi means “delicate yet resilient.” My family originates from the Middle East, specifically the Levant areas of Lebanon and Palestine. My father always tells me, “Remember who you are and where you come from.” I am proud of my heritage and eager to tell everyone about our language, food, and traditions. However, I did not always feel this way. Growing up, I always felt like I was stuck between two worlds. I grew up speaking two languages, Arabic and English, while the people around me only spoke English. I was Christian, specifically, Roman Catholic, while most people in my area were Baptist. Often I find that I am the first Arab a lot of people have ever met. Sadly there are many negative stereotypes about Arabs in the world. The only Arabic people or characters you see in American media are terrorists in action movies, the news, or political ads. I’ve had people make plenty of terrorist innuendos and remarks towards me, which is very hurtful. Because of this, I have always felt an almost unspoken pressure to be on my best behavior. As an American of Mediterranean background, I am proud of who I am, but I feel out of place in society because I am unable to identify with any of the labels that have been created. I’m not a “person of color” because my complexion is “white” but I’m not “white” because of my ethnicity, culture, language, and life experiences aren’t the same as other “white” people. As a way to cope with feeling like I don’t fit in, I have decided to embrace who I am and share it with the people around me. I am also trying to be a voice for people who identify as Arab American because there isn’t enough representation of our customs, traditions, music, news, and food in the media. If you ever have questions about Middle Eastern culture, please reach out! I’m also copresident of MENASA (Middle Eastern North African Student Association) this year at Davidson College, and we’d love for you to come to any events regardless of your racial, ethnic, or cultural identity and background.

Nahi Nadra, 19, is a Denver resident and a sophomore at Davidson College pursuing a pre-medicine track as a biology major. In addition to her heavy course load, she is a leader of the Catholic Campus Ministry, Co-President of the Middle Eastern North African Student Association (MENASA), and works as a biology lab assistant. In her free time Nahi has several hobbies including playing the piano since age 5, listening to music, and watching/ critiquing movies. Above all, Nahi enjoys spending time with family and friends.