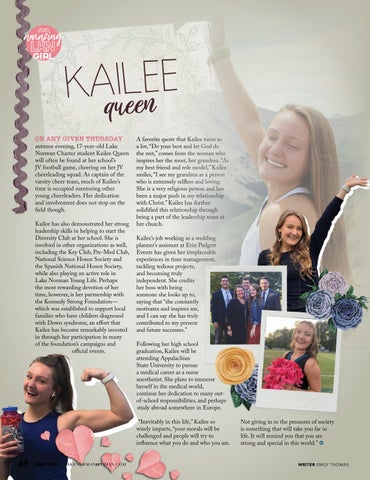 ON ANY GIVEN THURSDAY autumn evening, 17-year-old Lake Norman Charter student Kailee Queen will often be found at her school’s JV football game, cheering on her JV cheerleading squad. As captain of the varsity cheer team, much of Kailee’s time is occupied mentoring other young cheerleaders. Her dedication and involvement does not stop on the field though. Kailee has also demonstrated her strong leadership skills in helping to start the Diversity Club at her school. She is involved in other organizations as well, including the Key Club, Pre-Med Club, National Science Honor Society and the Spanish National Honor Society, while also playing an active role in Lake Norman Young Life. Perhaps the most rewarding devotion of her time, however, is her partnership with the Kennedy Strong Foundation— which was established to support local families who have children diagnosed with Down syndrome, an effort that Kailee has become remarkably invested in through her participation in many of the foundation’s campaigns and official events.

A favorite quote that Kailee turns to a lot, “Do your best and let God do the rest,” comes from the woman who inspires her the most, her grandma. “As my best friend and role model,” Kailee smiles, “I see my grandma as a person who is extremely selfless and loving. She is a very religious person and has been a major push in my relationship with Christ.” Kailee has further solidified this relationship through being a part of the leadership team at her church. Kailee’s job working as a wedding planner’s assistant at Erin Padgett Events has given her irreplaceable experiences in time management, tackling tedious projects, and becoming truly independent. She credits her boss with being someone she looks up to, saying that “she constantly motivates and inspires me, and I can say she has truly contributed to my present and future successes.” Following her high school graduation, Kailee will be attending Appalachian State University to pursue a medical career as a nurse anesthetist. She plans to immerse herself in the medical world, continue her dedication to many outof-school responsibilities, and perhaps study abroad somewhere in Europe. “Inevitably in this life,” Kailee so wisely imparts, “your morals will be challenged and people will try to influence what you do and who you are.

Not giving in to the pressures of society is something that will take you far in life. It will remind you that you are strong and special in this world.” w WRITER EMILY THOMAS