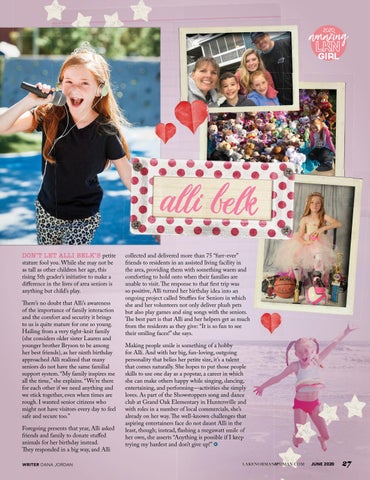 alli belk DON’T LET ALLI BELK’S petite stature fool you. While she may not be as tall as other children her age, this rising 5th grader’s initiative to make a difference in the lives of area seniors is anything but child’s play. There’s no doubt that Alli’s awareness of the importance of family interaction and the comfort and security it brings to us is quite mature for one so young. Hailing from a very tight-knit family (she considers older sister Lauren and younger brother Bryson to be among her best friends), as her ninth birthday approached Alli realized that many seniors do not have the same familial support system. “My family inspires me all the time,” she explains. “We’re there for each other if we need anything and we stick together, even when times are rough. I wanted senior citizens who might not have visitors every day to feel safe and secure too.” Foregoing presents that year, Alli asked friends and family to donate stuffed animals for her birthday instead. They responded in a big way, and Alli WRITER DANA JORDAN

collected and delivered more than 75 “furr-ever” friends to residents in an assisted living facility in the area, providing them with something warm and comforting to hold onto when their families are unable to visit. The response to that first trip was so positive, Alli turned her birthday idea into an ongoing project called Stuffies for Seniors in which she and her volunteers not only deliver plush pets but also play games and sing songs with the seniors. The best part is that Alli and her helpers get as much from the residents as they give: “It is so fun to see their smiling faces!” she says. Making people smile is something of a hobby for Alli. And with her big, fun-loving, outgoing personality that belies her petite size, it’s a talent that comes naturally. She hopes to put those people skills to use one day as a popstar, a career in which she can make others happy while singing, dancing, entertaining, and performing—activities she simply loves. As part of the Showstoppers song and dance club at Grand Oak Elementary in Huntersville and with roles in a number of local commercials, she’s already on her way. The well-known challenges that aspiring entertainers face do not daunt Alli in the least, though; instead, flashing a megawatt smile of her own, she asserts “Anything is possible if I keep trying my hardest and don’t give up!” w

L AKE NOR M AN