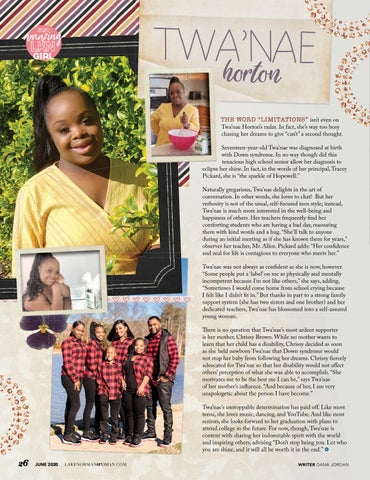 THE WORD “LIMITATIONS” isn’t even on Twa’nae Horton’s radar. In fact, she’s way too busy chasing her dreams to give “can’t” a second thought. Seventeen-year-old Twa’nae was diagnosed at birth with Down syndrome. In no way though did this tenacious high school senior allow her diagnosis to eclipse her shine. In fact, in the words of her principal, Tracey Pickard, she is “the sparkle of Hopewell.” Naturally gregarious, Twa’nae delights in the art of conversation. In other words, she loves to chat! But her verbosity is not of the usual, self-focused teen style; instead, Twa’nae is much more interested in the well-being and happiness of others. Her teachers frequently find her comforting students who are having a bad day, reassuring them with kind words and a hug. “She’ll talk to anyone during an initial meeting as if she has known them for years,” observes her teacher, Mr. Allen. Pickard adds: “Her confidence and zeal for life is contagious to everyone who meets her.” Twa’nae was not always as confident as she is now, however. “Some people put a ‘label’ on me as physically and mentally incompetent because I’m not like others,” she says, adding, “Sometimes I would come home from school crying because I felt like I didn’t fit in.” But thanks in part to a strong family support system (she has two sisters and one brother) and her dedicated teachers, Twa’nae has blossomed into a self-assured young woman. There is no question that Twa’nae’s most ardent supporter is her mother, Chrissy Brown. While no mother wants to learn that her child has a disability, Chrissy decided as soon as she held newborn Twa’nae that Down syndrome would not stop her baby from following her dreams. Chrissy fiercely advocated for Twa’nae so that her disability would not affect others’ perception of what she was able to accomplish. “She motivates me to be the best me I can be,” says Twa’nae of her mother’s influence. “And because of her, I am very unapologetic about the person I have become.” Twa’nae’s unstoppable determination has paid off. Like most teens, she loves music, dancing, and YouTube. And like most seniors, she looks forward to her graduation with plans to attend college in the future. For now, though, Twa’nae is content with sharing her indomitable spirit with the world and inspiring others, advising “Don’t stop being you. Let who you are shine, and it will all be worth it in the end.” w