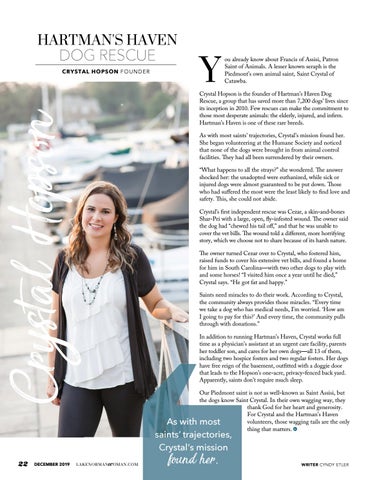 ou already know about Francis of Assisi, Patron Saint of Animals. A lesser known seraph is the Piedmont’s own animal saint, Saint Crystal of Catawba.

Crystal Hopson is the founder of Hartman’s Haven Dog Rescue, a group that has saved more than 7,200 dogs’ lives since its inception in 2010. Few rescues can make the commitment to those most desperate animals: the elderly, injured, and infirm. Hartman’s Haven is one of these rare breeds. As with most saints’ trajectories, Crystal’s mission found her. She began volunteering at the Humane Society and noticed that none of the dogs were brought in from animal control facilities. They had all been surrendered by their owners. “What happens to all the strays?” she wondered. The answer shocked her: the unadopted were euthanized, while sick or injured dogs were almost guaranteed to be put down. Those who had suffered the most were the least likely to find love and safety. This, she could not abide. Crystal’s first independent rescue was Cezar, a skin-and-bones Shar-Pei with a large, open, fly-infested wound. The owner said the dog had “chewed his tail off,” and that he was unable to cover the vet bills. The wound told a different, more horrifying story, which we choose not to share because of its harsh nature. The owner turned Cezar over to Crystal, who fostered him, raised funds to cover his extensive vet bills, and found a home for him in South Carolina—with two other dogs to play with and some horses! “I visited him once a year until he died,” Crystal says. “He got fat and happy.” Saints need miracles to do their work. According to Crystal, the community always provides those miracles. “Every time we take a dog who has medical needs, I’m worried. ‘How am I going to pay for this?’ And every time, the community pulls through with donations.” In addition to running Hartman’s Haven, Crystal works full time as a physician’s assistant at an urgent care facility, parents her toddler son, and cares for her own dogs—all 13 of them, including two hospice fosters and two regular fosters. Her dogs have free reign of the basement, outfitted with a doggie door that leads to the Hopson’s one-acre, privacy-fenced back yard. Apparently, saints don’t require much sleep. Our Piedmont saint is not as well-known as Saint Assisi, but the dogs know Saint Crystal. In their own wagging way, they thank God for her heart and generosity. For Crystal and the Hartman’s Haven volunteers, those wagging tails are the only most thing that matters. w

As with saints’ trajectories, Crystal’s mission