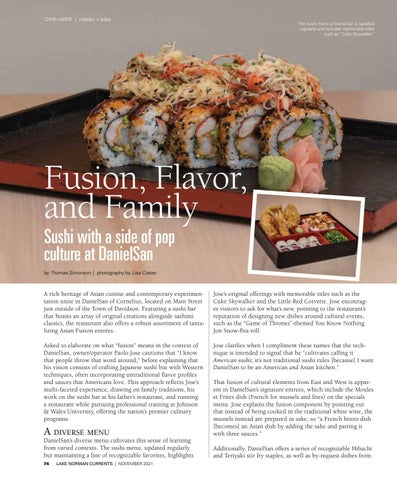 The sushi menu at DanielSan is updated regularly and includes memorable titles such as “Cuke Skywalker.”

Fusion, Flavor, and Family Sushi with a side of pop culture at DanielSan by Thomas Simonson | photography by Lisa Crates

A rich heritage of Asian cuisine and contemporary experimentation unite in DanielSan of Cornelius, located on Main Street just outside of the Town of Davidson. Featuring a sushi bar that boasts an array of original creations alongside sashimi classics, the restaurant also offers a robust assortment of tantalizing Asian Fusion entrées.

Jose’s original offerings with memorable titles such as the Cuke Skywalker and the Little Red Corvette. Jose encourages visitors to ask for what’s new, pointing to the restaurant’s reputation of designing new dishes around cultural events, such as the “Game of Thrones”-themed You Know Nothing Jon Snow-Pea roll.

Asked to elaborate on what “fusion” means in the context of DanielSan, owner/operator Paolo Jose cautions that “I know that people throw that word around,” before explaining that his vision consists of crafting Japanese sushi but with Western techniques, often incorporating untraditional flavor profiles and sauces that Americans love. This approach reflects Jose’s multi-faceted experience, drawing on family traditions, his work on the sushi bar at his father’s restaurant, and running a restaurant while pursuing professional training at Johnson &amp; Wales University, offering the nation’s premier culinary programs.

Jose clarifies when I compliment these names that the technique is intended to signal that he “cultivates calling it American sushi; it’s not traditional sushi rules [because] I want DanielSan to be an American and Asian kitchen.”

That fusion of cultural elements from East and West is apparent in DanielSan’s signature entrees, which include the Moules et Frites dish (French for mussels and fries) on the specials menu. Jose explains the fusion component by pointing out that instead of being cooked in the traditional white wine, the mussels instead are prepared in sake, so “a French bistro dish [becomes] an Asian dish by adding the sake and pairing it with three sauces.” Additionally, DanielSan offers a series of recognizable Hibachi and Teriyaki stir fry staples, as well as by-request dishes from