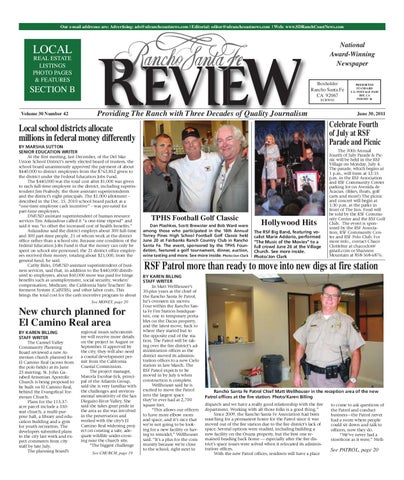 Providing The Ranch with Three Decades of Quality Journalism

New church planned for El Camino Real area BY KAREN BILLING STAFF WRITER The Carmel Valley Community Planning Board reviewed a new Armenian church planned for El Camino Real (across from the polo fields) at its June 23 meeting. St. John Garabed Armenian Apostolic Church is being proposed to be built on El Camino Real, behind the Evangelical Formosan Church. Plans for the 113.37acre parcel include a 350seat church, a multi-purpose hall, a library and education building and a gym for youth recreation. The developers submitted plans to the city last week and expect comments from city staff by late July. The planning board’s

regional issues subcommittee will receive more details on the project in August or September. If approved by the city, they will also need a coastal development permit from the California Coastal Commission. The project manager, Marcela Escobar-Eck, principal of the Atlantis Group, said she is very familiar with the challenges and environmental sensitivity of the San Dieguito River Valley. She said she takes great pride in the area as she was involved in the preservation and worked with the city’s El Camino Real widening project on creating a safe, adequate wildlife under-crossing near the church site. “The biggest challenge See CHURCH, page 19

Celebrate Fourth of July at RSF Parade and Picnic

Local school districts allocate millions in federal money differently BY MARSHA SUTTON SENIOR EDUCATION WRITER At the first meeting, last December, of the Del Mar Union School District’s newly elected board of trustees, the school board unanimously approved the payment of about $440,000 to district employees from the $763,852 given to the district under the Federal Education Jobs Fund. The $440,000 was the total cost after $1,000 was given to each full-time employee in the district, including superintendent Jim Peabody, the three assistant superintendents and the district’s eight principals. The $1,000 allotment – described in the Dec. 15, 2010 school board packet as a “one-time employee cash incentive” – was pro-rated for part-time employees. DMUSD assistant superintendent of human resource services Tim Asfazadour called it “a one-time stipend” and said it was “to offset the increased cost of health benefits.” Asfazadour said the district employs about 300 full-time and 300 part-time people, 21 of whom work at the district office rather than a school site. Because one condition of the Federal Education Jobs Fund is that the money can only be spent on school site personnel, the 21 district office employees received their money, totaling about $21,000, from the general fund, he said. Cathy Birks, DMUSD assistant superintendent of business services, said that, in addition to the $440,000 distributed to employees, about $60,000 more was paid for fringe benefits such as unemployment, social security, workers’ compensation, Medicare, the California State Teachers’ Retirement System (CalSTRS), and other labor costs. This brings the total cost for the cash incentive program to about

Hollywood Hits The RSF Big Band, featuring vocalist Marie Addario, performed “The Music of the Movies” to a full crowd June 26 at the Village Church. See more inside. Photo/Jon Clark

The 30th Annual Fourth of July Parade & Picnic will be held in the RSF Village on Monday, July 4. The parade, which begins at 1 p.m., will form at 12:15 p.m. in the RSF Association and RSF Community Center parking lot on Avenida de Acacias. (Bikes, floats, golf carts and more!) The picnic and concert will begin at 1:30 p.m. at the parks in front of The Inn. Food will be sold by the RSF Community Center and the RSF Golf Club. The event is sponsored by the RSF Association, RSF Community Center and RSF Polo Club. For more info., contact Chaco Clotfelter at chacoclot@ gmail.com or Shannon Mountain at 858-568-6876.

RSF Patrol more than ready to move into new digs at fire station BY KAREN BILLING STAFF WRITER In Matt Wellhouser’s 30-plus years as the chief of the Rancho Santa Fe Patrol, he’s overseen six moves: Four within the Rancho Santa Fe Fire Station headquarters, one to temporary portables on the Dacus property, and the latest move, back to where they started but to the opposite end of the station. The Patrol will be taking over the fire district’s administration offices as the district moved its administration offices to a new Cielo station in late March. The RSF Patrol expects to be moved in by July 6 when construction is complete. Wellhouser said he is excited to move the Patrol into the largest space they’ve ever had at 2,700 square feet. “This allows our officers to have more elbow room and space, and it’s nice that we’re not going to be looking for a new facility or having to remodel,” Wellhouser said. “It’s a plus for the community because we’re close to the school, right next to

Rancho Santa Fe Patrol Chief Matt Wellhouser in the reception area of the new Patrol offices at the fire station. Photo/Karen Billing dispatch and we have a really good relationship with the fire department. Working with all those folks is a good thing.” Since 2009, the Rancho Santa Fe Association had been searching for a permanent home for the Patrol since it was moved out of the fire station due to the fire district’s lack of space. Several options were studied, including building a new facility on the Osuna property, but the best one remained heading back home — especially after the fire district’s space issues were solved when it relocated its administration offices. With the new Patrol offices, residents will have a place

to come to ask questions of the Patrol and conduct business—the Patrol never had a room where people could sit down and talk to officers, now they do. “We’ve never had a storefront as it were,” Well-

RSF residents Jere and Joyce Oren’s generosity extends to Rady Children’s Hospital San Diego For Rancho Santa Fe residents Jere and Joyce Oren, philanthropy isn’t just a word, it’s a way of life. “My idea of philanthropy is to give it all away,” said Jere Oren. “I feel like if I can do something to help someone else, then that’s what I should do.” The Orens recently established a charitable gift annuity in the amount of $100,000 designated for the Peckham Center for Cancer and Blood Disorders at Rady Children’s Hospital – San Diego. The Peckham Center offers the full range of clinical services, as well as psychosocial programs and resources, to help patients and their families. Jere and Joyce Oren Last year, the Peckham Center attended to more Photo/Jon Clark than 15,400 visits at the Carley Copley Outpatient Clinic, cared for 200 new cancer patients, performed nearly 30 bone marrow transplants and conducted more than 64 clinical research studies, including 40 clinical treatment trials. By establishing a charitable gift annuity, the Orens receive income from the gift for the rest of their lives, after which the remainder of the annuity transfers to Rady Children’s. Jere Oren said that when his daughter was little, she was treated for a staph infection at Boston Children’s. He recalls how impressed he was by the hospital’s dedication to children. His gift to Rady Children’s is his way of giving back to pediatric medicine. Originally from the Boston area, Jere Oren was in the insurance business before moving to Hawaii where he began a career in real estate. Love brought him to Rancho Santa Fe in 1979, where he continued to work in real estate. Today, the Orens are avid travelers and remain active in the Rancho Santa Fe community. They are very involved with the Rancho Santa Fe Garden Club and the Village Church. Additionally, Jere Oren has volunteered at Scripps Memorial Hospital for more than 30 years. Through his generosity, Jere Oren is doing his part to take care of things for San Diego’s children and leaving a ripe legacy for the future. “I wanted to do it now,” Jere Oren said, “and enjoy the thrill of seeing others enjoy the fruits of my labor.”

Holiday delays curbside trash and recycling pick up Waste Management of North County and Coast Waste Management’s curbside residential trash and recycling pickup schedule will be delayed by one day throughout the week of July 4, in observance of Independence Day. This means customers in Rancho Santa Fe should place their carts out for pick-up one day later than usual, beginning Tuesday, July 5 through Saturday, July 9. Customer service is available at 1-866-WM RECYCLE. For more information about recycling, log onto http:// northcounty.wm.com.