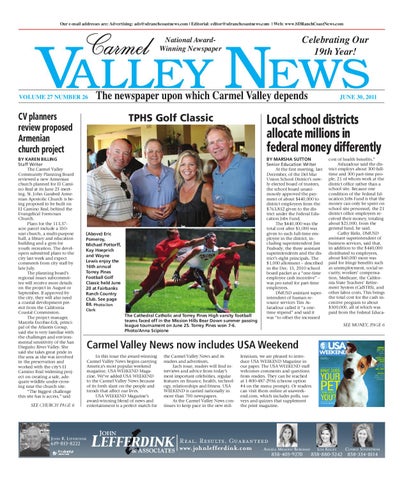 CV planners review proposed Armenian church project BY KAREN BILLING Staff Writer The Carmel Valley Community Planning Board reviewed a new Armenian church planned for El Camino Real at its June 23 meeting. St. John Garabed Armenian Apostolic Church is being proposed to be built on El Camino Real, behind the Evangelical Formosan Church. Plans for the 113.37acre parcel include a 350seat church, a multi-purpose hall, a library and education building and a gym for youth recreation. The developers submitted plans to the city last week and expect comments from city staff by late July. The planning board’s regional issues subcommittee will receive more details on the project in August or September. If approved by the city, they will also need a coastal development permit from the California Coastal Commission. The project manager, Marcela Escobar-Eck, principal of the Atlantis Group, said she is very familiar with the challenges and environmental sensitivity of the San Dieguito River Valley. She said she takes great pride in the area as she was involved in the preservation and worked with the city’s El Camino Real widening project on creating a safe, adequate wildlife under-crossing near the church site. “The biggest challenge this site has is access,” said

BY MARSHA SUTTON Senior Education Writer At the first meeting, last December, of the Del Mar Union School District’s newly elected board of trustees, the school board unanimously approved the payment of about $440,000 to district employees from the $763,852 given to the district under the Federal Education Jobs Fund. The $440,000 was the total cost after $1,000 was given to each full-time employee in the district, including superintendent Jim Peabody, the three assistant superintendents and the district’s eight principals. The $1,000 allotment – described in the Dec. 15, 2010 school board packet as a “one-time employee cash incentive” – was pro-rated for part-time employees. DMUSD assistant superintendent of human resource services Tim Asfazadour called it “a onetime stipend” and said it was “to offset the increased

cost of health benefits.” Asfazadour said the district employs about 300 fulltime and 300 part-time people, 21 of whom work at the district office rather than a school site. Because one condition of the Federal Education Jobs Fund is that the money can only be spent on school site personnel, the 21 district office employees received their money, totaling about $21,000, from the general fund, he said. Cathy Birks, DMUSD assistant superintendent of business services, said that, in addition to the $440,000 distributed to employees, about $60,000 more was paid for fringe benefits such as unemployment, social security, workers’ compensation, Medicare, the California State Teachers’ Retirement System (CalSTRS), and other labor costs. This brings the total cost for the cash incentive program to about $500,000, all of which was paid from the Federal Educa-

the Carmel Valley News and its readers and advertisers. Each issue, readers will find interviews and advice from today’s most important celebrities, regular features on finance, health, technology, relationships and fitness. USA WEEKEND is carried nationally in more than 700 newspapers. As the Carmel Valley News continues to keep pace in the new mil-

lennium, we are pleased to introduce USA WEEKEND Magazine in our paper. The USA WEEKEND staff welcomes comments and questions from readers. They can be reached at 1-800-487-2956 (choose option #4 on the menu prompt). Or readers can visit them online at usaweekend.com, which includes polls, surveys and quizzes that supplement the print magazine.

Reflections Publishing’s ‘Read, Write and Draw Workshop’ to be held at CV Library The next Reflections Publishing’s “Read, Write, and Draw Workshop” will take place at the Carmel Valley Public Library on Friday, July 29, from 1-3 p.m. Student authors and illustrators will be leading the workshop to inspire other children to become writers and illustrators. Child psychologist Dr. Adria O’Donnell; family therapist Linda Sorkin; Jamie Dicken with “Believe in She”; and Teacher-Kristyn Braund will be on hand to hold a Q&A session for parents and children. A jean drive will also be held for the San Diego Rescue Mission — new and used jeans appreciated!

Friday will mark the start of the July Caught on Camera: Community Photo Contest. July’s theme is best Red, White, and Blue 4th of July/Patriotic photo. Go to delmartimes.com/contests and submit your photo. Winners are decided by 45% photo views and 55% editorial judgment. So get out those cameras and snap some great pictures over the holiday weekend. Remember to check out www.delmartimes.net/category/ news/carmel-valley/ for the latest Carmel Valley news and events.