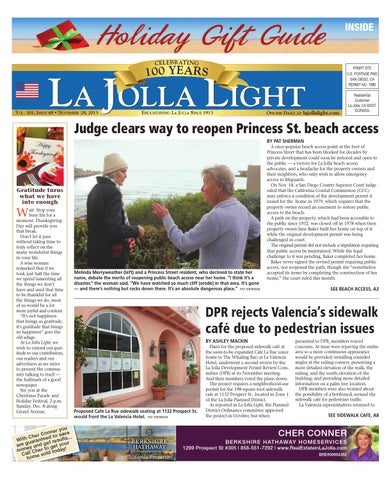 Gratitude turns what we have into enough

ait. Stop your busy life for a moment. Thanksgiving Day will provide you that break. Don’t let it pass without taking time to truly reflect on the many wonderful things in your life. A wise woman remarked that if we took just half the time we spend lamenting all the things we don’t have and used that time to be thankful for all the things we do, most of us would be a lot more joyful and content. “It’s not happiness that brings us gratitude, it’s gratitude that brings us happiness” goes the old adage. At La Jolla Light, we wish to extend our gratitude to our contributors, our readers and our advertisers as we strive to present the community talking to itself — the hallmark of a good newspaper. See you at the Christmas Parade and Holiday Festival, 2 p.m. Sunday, Dec. 8 along Girard Avenue.

Melinda Merryweather (left) and a Princess Street resident, who declined to state her name, debate the merits of reopening public beach access near her home. “I think it’s a disaster,” the woman said. “We have watched so much cliff (erode) in that area. It’s gone — and there’s nothing but rocks down there. It’s an absolute dangerous place.” Pat Sherman

By Pat Sherman A once-popular beach access point at the foot of Princess Street that has been blocked for decades by private development could soon be restored and open to the public — a victory for La Jolla beach access advocates, and a headache for the property owners and their neighbors, who only wish to allow emergency access to lifeguards. On Nov. 18, a San Diego County Superior Court judge ruled that the California Coastal Commission (CCC) may enforce a condition of the development permit it issued for the home in 1979, which requires that the property owner record an easement to restore public access to the beach. A path on the property, which had been accessible to the public since 1932, was closed off in 1978 when then property owner Jane Baker built her home on top of it while the original development permit was being challenged in court. The original permit did not include a stipulation requiring that public access be maintained. While the legal challenge to it was pending, Baker completed her home. Baker never signed the revised permit requiring public access, nor reopened the path, though she “nonetheless accepted its terms by completing the construction of her home,” the court ruled this month. See Beach Access, A3

By Ashley Mackin Plans for the proposed sidewalk café at the soon-to-be expanded Café La Rue (once home to The Whaling Bar) at La Valencia Hotel, underwent a second review by the La Jolla Development Permit Review Committee (DPR) at its November meeting. And then members voted the plans down. The project requires a neighborhood-use permit for the 198-square-foot sidewalk cafe at 1132 Prospect St., located in Zone 1 of the La Jolla Planned District. As reported in La Jolla Light, the Planned District Ordinance committee approved the project in October, but when

presented to DPR, members voiced concerns. At issue were repaving the entire area so a more continuous appearance would be provided; installing rounded angles at the railing corners; presenting a more detailed elevation of the walk, the railing, and the south elevation of the building; and providing more detailed information on a palm tree location. DPR members were also worried about the possibility of a bottleneck around the sidewalk café for pedestrian traffic. La Valencia representatives returned to 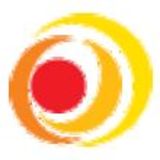