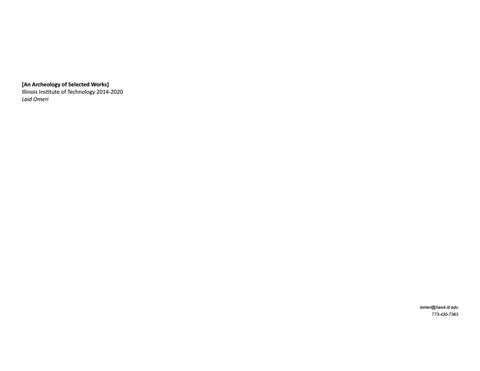 Architectonic undulation of both the ceiling and floor creates two spaces, one inside where compression and expansion frames the armatures and boats, and a roofs cape where one sees the site unobtrused. A boathouse is projected as a way to further activate both areas of the site. The north branch river of Chicago cuts the site into two. A man made park on the east, and a marsh on the left. The site creates a gated area surrounded by trees where the Architecture intersects to create a new asserted space where inhabitants can cross. Idea as the generator of architecture Site and Context as distinct entities Space as criteria for form Composition of space through division Structure as a unifying aspect Space and structure through Architectonics

In Situ. Extension of site through action. Object within site. Rhino Vray, Photoshop.

Displacement of existing architecture creates a spacial condition where the new and old are intertwined. The history of the site is unearthed through the process of quarrying out part of the site itself. Forgotten ore walls frame a site with history rooted in industry. The Chicago Steel Works asserted itself a new man made land built up from the residue of industry. The architecture keeps the landscape created through history by creating a node at one side, and leaving the rest of the site alone. Art as a method. History as a ruin. Land art and architecture as one. Composition of space through division Thickness and space. Architecture as a node in landscape.

Quarrying. Artificial and pre-existing earth is uncovered by a method akin to the industry that created it. MDF, Basswood, Foam, Plaster, Cardboard.

TEAM: Laid Omeri, Tyler Sauter, Ekerin Agaboola, David Zitek, Burhan Jamali, Rachel Starr, Jamie Borden, Natalie Zapato Built Project: pg 39-43 Individual Project: pg 44-53 A single architectural entity creates space through the division of enclosed and implied space. The use of a small enclosed space, to a larger open pergola creates a larger feeling of space within the architecture. The bracket concrete walls in line with the steel frame generate this condition. The site of Loiza in Puerto Rico use a variety of concrete and pergola framed buildings, the architecture wants to create a new prototypical one room school house through the use of vernacular construction techniques and typological understanding. Enclosure and Implied space. Vernacular construction. Architecture as an activity. Structure as motife.

Parameters. Shear walls act as the driving force of the space. The drawing is updated with new layers as parameters change. Graphite and Pen, on Newsprint and Tracing paper.

Time. The pure architectonic element of the Architecture is revealed as an artifact in history. Vray Rhino, Photoshop.

Sight. A relationship to the gym is established, the space in between is seen as opportunity for unexpected activity. ACAD Vector drawing, Photoshop.

Framed. The view is situated for what can happen in between the two spaces of the schoolhouse and gym. VRAY Rhino, Photoshop.

Partition. Space is divided through the structural use of concrete shear 8walls. VRAY Rhino, Photoshop.

Autonomy. The Architecture can act as an independent autonomous object, creating its own space and events within. Concrete Cast, Acrylic Frosted, Basswood. 1/4â&#x20AC;? = 1â&#x20AC;&#x2122;

professor: Leslie Johnson Sigurd Lewerenze, Jorn Utzon, Alvar Aalto, Svere Fehn, and Peter Celcing have been analyzed through drawing techniques and the lens of phenomenology. The drawing is used as a tool to investigate and think about five Nordic architects. The drawing is seen as a way to test and analyze specific moments of Architectural phenomena to further understand and diagram the process. Drawing as Investigation. Multi Layered drawings. Palimpsest and Weathering as a process. Analysis through phenomena. Operation as idea.

Negotiation. “Peter Celcing” Brick and geometry negotiate with each other. ACAD Drawing, transferred onto Mylar.

Light and Shadow. “Jorn Utzon” Light & Shadow are mapped to show its relationship to its form. Graphite on 130lb paper.

TEAM: Laid Omeri, Tyler Sauter, Insan Chiang, Yujin Yang, Ola Odukoya NOMAS Competition Directors: Laid Omeri, Tyler Sauter Porosity and convergence define this mixed-use and mixed-income development in the Flatbush neighborhood of Brooklyn. The form and space of the overall complex reinforces the program, which knits the paths and privacies of the inhabitantsâ&#x20AC;&#x2122; homes with spaces of action and event that reach out to connect to community partners. The housing needs of the neighborhood are supported by equitable and interwoven opportunities for market-rate, affordable, and subsidized housing for all stages of life, while also establishing a place for cultural, educational, and commercial exchange. The Nostrand Meeting House is both a place of convergence and a model of convergence. Policy as the generator of architecture. Inhabitation as a focus. Non-Object focused design. Collaboration.

Fabric. Nested within the fabric, the Architecture establishes itself as part of the milieu. Basswood, Cardboard, Transferred from ACAD drawing.

intersecting locally-supportive housing policies with the rituals of daily life, a series of spatial, visual, and auditory connections winds across and through the development at several scales.

The form and space of the overall complex reinforces the program, which knits the paths and privacie of the inhabitants’ homes with spaces of action and event that reach connect to community partners.

It is simultaneously a microcosm and a critical node. The project uses several cooperative housing models to empower residents to build equity and establish and sustain affordability on-site for the long term.

es h out to

Together, the various housing models allow residents to become stakeholders in the well-being of the project and encourage active participation in its operations through multiple le

Place. Interface with the existing community and fabric help to reinforce the architecture as a space not an object. Basswood, Cardboard, Transferred from ACAD drawing.

There are layers within Bronzeville shown in its historical reading of the site. Modernist Towers, Imposed Campus, New Development, and the growing student presence The Architecture reads all as a trace to figure out a negotiation while at the same time strategically inserting its own architectural condition. An exploration into the urban scape of Santiago Chile and the developing and experimented Bronzeville in South Side Chicago. The Modernist idea of tower in the park is inverted and superimposed with a system derived from the Santiago fabric to produce a court condition on the center with density on the perimeter. The study of Fabric and organization of Urban Scapes. Understanding spatial urban conditions through abstraction. Superimposition as a compositional and generative tool. Collage as a generative tool for design. Investigation of â&#x20AC;&#x153;operationsâ&#x20AC;? within a abstract space Considering non temporal understanding of process. Palimpsest and layering of historical and physical site.

Collage. Bronzeville site near IIT. With collage of Santiago Chile as a new urban fabric. Bond paper with glue. Scanned.

Figure Ground. Fabric of Santiago is exposed through a solid/void relationship. Plaster Cast.

Courtyards. Spaces are interjected by a court to introduce vertical space within a dense fabric. Graphite on 130lb paper.

professor: Lluis Ortega Collaboration: Tanil Raif, Paula Volpato Revisiting archigrams idea of non-functional architecture that focused on journey as spectacle, the architecture proposes a similar anti-functional ideology. While archigramâ&#x20AC;&#x2122;s system was designed for the automobile, he architecture translates the idea into a contemporary public park for pedestrian experience: Undulant Spectacles as a journey calibrated around the relationship between spectator and spectacle. The surfaces of the landscape allow for variation, ranging from open hills to enclosed pockets of growth. The treatment of the surfaces suggest platforms for different social behaviors to play out, as well as different acoustical effects that are further calibrated by greenery and wind through openings. This helps adjust the range of the spaces, both visually and acoustically, while the landscape still offers open choice of circulation. Cybernetics as the generator of architecture Laboratory testing of architectonics. Space as a political gesture. Emergent Architecture. Ecology as a aspect of site.