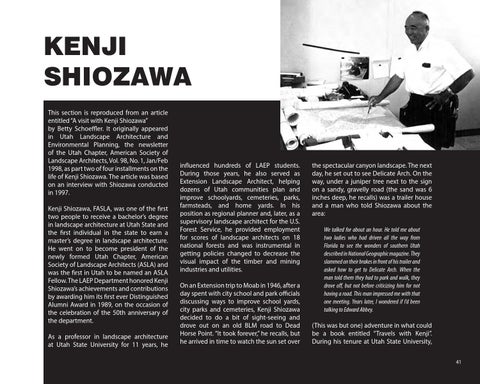 KENJI SHIOZAWA This section is reproduced from an article entitled “A visit with Kenji Shiozawa” by Betty Schoeffler. It originally appeared in Utah Landscape Architecture and Environmental Planning, the newsletter of the Utah Chapter, American Society of Landscape Architects, Vol. 98, No. 1, Jan/Feb 1998, as part two of four installments on the life of Kenji Shiozawa. The article was based on an interview with Shiozawa conducted in 1997. Kenji Shiozawa, FASLA, was one of the first two people to receive a bachelor’s degree in landscape architecture at Utah State and the first individual in the state to earn a master’s degree in landscape architecture. He went on to become president of the newly formed Utah Chapter, American Society of Landscape Architects (ASLA) and was the first in Utah to be named an ASLA Fellow. The LAEP Department honored Kenji Shiozawa’s achievements and contributions by awarding him its first ever Distinguished Alumni Award in 1989, on the occasion of the celebration of the 50th anniversary of the department. As a professor in landscape architecture at Utah State University for 11 years, he

influenced hundreds of LAEP students. During those years, he also served as Extension Landscape Architect, helping dozens of Utah communities plan and improve schoolyards, cemeteries, parks, farmsteads, and home yards. In his position as regional planner and, later, as a supervisory landscape architect for the U.S. Forest Service, he provided employment for scores of landscape architects on 18 national forests and was instrumental in getting policies changed to decrease the visual impact of the timber and mining industries and utilities. On an Extension trip to Moab in 1946, after a day spent with city school and park officials discussing ways to improve school yards, city parks and cemeteries, Kenji Shiozawa decided to do a bit of sight-seeing and drove out on an old BLM road to Dead Horse Point. “It took forever,” he recalls, but he arrived in time to watch the sun set over

the spectacular canyon landscape. The next day, he set out to see Delicate Arch. On the way, under a juniper tree next to the sign on a sandy, gravelly road (the sand was 6 inches deep, he recalls) was a trailer house and a man who told Shiozawa about the area: We talked for about an hour. He told me about two ladies who had driven all the way from Florida to see the wonders of southern Utah described in National Geographic magazine. They slammed on their brakes in front of his trailer and asked how to get to Delicate Arch. When the man told them they had to park and walk, they drove off, but not before criticizing him for not having a road. This man impressed me with that one meeting. Years later, I wondered if I’d been talking to Edward Abbey. (This was but one) adventure in what could be a book entitled “Travels with Kenji”. During his tenure at Utah State University, 41 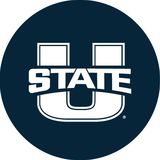