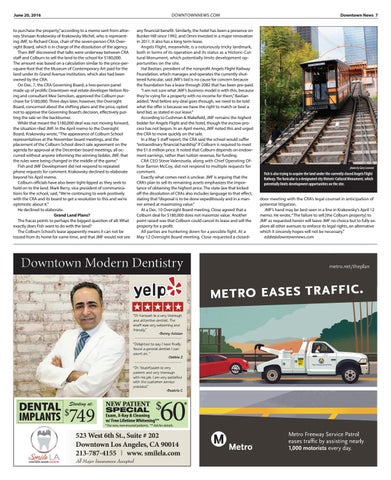 to purchase the property,” according to a memo sent from attorney Shinaan Krakowsky of Krakowsky Michel, who is representing JMF, to Richard Close, chair of the seven-person CRA Oversight Board, which is in charge of the dissolution of the agency. Then JMF discovered that talks were underway between CRA staff and Colburn to sell the land to the school for $180,000. The amount was based on a calculation similar to the price-persquare-foot that the Museum of Contemporary Art paid for the land under its Grand Avenue institution, which also had been owned by the CRA. On Dec. 7, the CRA Governing Board, a two-person panel made up of prolific Downtown real estate developer Nelson Rising and consultant Mee Semcken, approved the Colburn purchase for $180,000. Three days later, however, the Oversight Board, concerned about the shifting plans and the price, opted not to approve the Governing Board’s decision, effectively putting the sale on the backburner. While that meant the $180,000 deal was not moving forward, the situation riled JMF. In the April memo to the Oversight Board, Krakowsky wrote, “The appearance of Colburn School representatives at the November board meetings, and the placement of the Colburn School direct sale agreement on the agenda for approval at the December board meetings, all occurred without anyone informing the winning bidder, JMF, that the rules were being changed in the middle of the game.” Fish and JMF Development did not respond to repeated phone requests for comment. Krakowsky declined to elaborate beyond his April memo. Colburn officials have also been tight-lipped as they seek to hold on to the land. Mark Berry, vice president of communications for the school, said, “We’re continuing to work positively with the CRA and its board to get a resolution to this and we’re optimistic about it.” He declined to elaborate. Grand Land Plans? The fracas points to perhaps the biggest question of all: What exactly does Fish want to do with the land? The Colburn School’s lease apparently means it can not be tossed from its home for some time, and that JMF would not see

any financial benefit. Similarly, the hotel has been a presence on Bunker Hill since 1992, and Omni invested in a major renovation in 2011. It also has a long term lease. Angels Flight, meanwhile, is a notoriously tricky landmark, both in terms of its operation and its status as a Historic-Cultural Monument, which potentially limits development opportunities on the site. Hal Bastian, president of the nonprofit Angels Flight Railway Foundation, which manages and operates the currently shuttered funicular, said JMF’s bid is no cause for concern because the foundation has a lease through 2082 that has been pre-paid. “I am not sure what JMF’s business model is with this, because they’re vying for a property with no income for them,” Bastian added. “And before any deal goes through, we need to be told what the offer is because we have the right to match or beat a land bid, as stated in our lease.” According to Cushman & Wakefield, JMF remains the highest bidder for Angels Flight and the hotel, though the escrow process has not begun. In an April memo, JMF noted this and urged the CRA to move quickly on the sale. In a May 5 staff report, the CRA said the school would suffer “extraordinary financial hardship” if Colburn is required to meet the $1.6 million price. It noted that Colburn depends on endowment earnings, rather than tuition revenue, for funding. CRA CEO Steve Valenzuela, along with Chief Operating Officer Barron McCoy, did not respond to multiple requests for comment. Exactly what comes next is unclear. JMF is arguing that the CRA’s plan to sell its remaining assets emphasizes the importance of obtaining the highest price. The state law that kicked off the dissolution of CRAs also includes language to that effect, stating that “disposal is to be done expeditiously and in a manner aimed at maximizing value.” At a Dec. 10 Oversight Board meeting, Close agreed that a Colburn deal for $180,000 does not maximize value. Another point raised was that Colburn could cancel its lease and sell the property for a profit. All parties are hunkering down for a possible fight. At a May 12 Oversight Board meeting, Close requested a closed-

“Dr Koroush is a very thorough and attentive dentist. The staff was very welcoming and friendly.” -Benny Azizian “Delighted to say I have finally found a general dentist I can count on. “ -Debbie Z “Dr. Yousefzadeh is very patient and very thorough with his job. I am very satisfied with the customer service provided.” -Beatriz C

Fish is also trying to acquire the land under the currently closed Angels Flight Railway. The funicular is a designated city Historic-Cultural Monument, which potentially limits development opportunities on the site.

door meeting with the CRA’s legal counsel in anticipation of potential litigation. JMF’s hand may be best seen in a line in Krakowsky’s April 12 memo. He wrote, “The failure to sell [the Colburn property] to JMF as requested herein will leave JMF no choice but to fully explore all other avenues to enforce its legal rights, an alternative which it sincerely hopes will not be necessary.” eddie@downtownnews.com 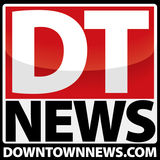