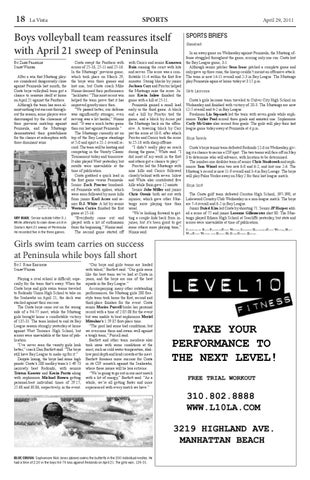 Boys volleyball team reassures itself with April 21 sweep of Peninsula By Zane Franklin Staff Writer After a win that Mustang players considered dangerously close against Peninsula last month, the Costa boys volleyball team got a chance to reassure itself at home on April 21 against the Panthers. Although the team has seen almost nothing but success throughout the season, some players were discouraged by the closeness of their previous matchup against Peninsula, and the Mustangs demonstrated their gratefulness for the chance at redemption with three dominant wins.

sky maul: Senior outside hitter D.J. White attempts to slam down a kill in Costa’s April 21 sweep of Peninsula. He recorded five in the three games.

Costa swept the Panthers with scores of 25-16, 25-11 and 25-16. In the Mustangs’ previous game, which took place on March 29, the boys won three games and lost one, but Costa coach Mike Ninnis deemed their performance “lackluster.” This most recent win helped the team prove that it has improved greatly since then. “We passed better, our defense was significantly stronger, even serving was a lot harder,” Ninnis said. “It was a much better game than our last against Peninsula.” The Mustangs currently sit on top of the Bay League standings at 5-0 and sport a 21-1 overall record. The team will be hosting and competing in the Varsity Classic Tournament today and tomorrow. It also played West yesterday, but results were unavailable at the time of publication. Costa grabbed a quick lead in the first game versus Peninsula. Senior Zack Proctor bombarded Peninsula with spikes, which were soon followed by more kills from junior Karl Acres and senior D.J. White. A hit by senior Weston Carico finished the first game at 25-16. “Everybody came out and played with a lot of enthusiasm from the beginning,” Ninnis said. The second game started off

with Carico and senior Kameron Bain running the court with hits and serves. The score was a comfortable 11-4 within the first few minutes. Strong blocks by junior Jackson Carr and Proctor helped the Mustangs raise the score. Junior Kevin Inlow finished the game with a kill at 25-11. Peninsula gained a small lead early in the third game. A block and a kill by Proctor tied the game, and a block by Acres put the Mustangs back on the offensive. A towering block by Carr put the score at 18-9, after which Proctor and Carico took the score to 25-16 with sharp offense. “I didn’t really play as much during the game,” White said. “I did most of my work in the first and others got a chance to play.” Proctor led the Mustangs with nine kills and Carico followed closely behind with seven. Inlow and White also contributed five kills while Bain gave 12 assists. Senior Jake Miller and junior Chris Orenic both sat out with injuries, which gave other Mustangs more playing time than usual. “We’re looking forward to getting a couple kids back from injuries, but it’s been good to get some others more playing time,” Ninnis said.

Girls swim team carries on success at Peninsula while boys fall short By J. Ryan Erickson Staff Writer Playing a rival school is difficult, especially for the team that’s away. When the Costa boys and girls swim teams traveled to Redondo Union High School to take on the Seahawks on April 21, the deck was stacked against their success. The Costa boys came out on the wrong side of a 94-75 meet, while the Mustang girls brought home a comfortable victory of 135-31. The team looked to end its Bay League season strongly yesterday at home against West Torrance High School, but scores were unavailable at the time of publication. “I’ve never seen the varsity girls look better,” coach Dan Bartlett said. “The boys still have Bay League to make up for it.” Despite losing, the boys had some high points. Costa’s 200 medley team’s 1:49.73 narrowly beat Redondo, with seniors Tristan Koester and Kevin Portis along with sophomore Michael Brown getting personal-best individual times of 29.17, 25.68 and 30.86, respectively, in the event.

“Our boys and girls teams are loaded with talent,” Bartlett said. “Our girls seem like the best team we’ve had at Costa in years, and the boys are one of the best squads in the Bay League.” Accompanying many other outstanding performances, the Mustang girls 200 freestyle team took home the first, second and third-place finishes for the event. Costa senior Marisa Purcell broke her personal record with a time of 2:05.08 for the event but was unable to beat sophomore Meriel Mitsakos’s 1:59.85 first-place time. “The pool had some bad conditions, but we overcame them and swam well against a tough team,” Purcell said. Bartlett and other team members also took issue with some conditions at the meet, such as cold water temperature, shallow pool depth and loud crowds at the meet. Bartlett foresees more success for Costa in its CIF rematch against the Seahawks, where these issues will be less extreme. “We’re going to go out in our next match with a lot of energy,” Bartlett said. “As a whole, we’re all getting faster and more experienced with every match we have.”

Sports Briefs Baseball In an away game on Wednesday against Peninsula, the Mustang offense struggled throughout the game, scoring only one run. Costa lost the Bay League game, 3-1. Although senior pitcher Sean Isaac pitched a complete game and only gave up three runs, the lineup couldn’t mount an offensive attack. The team is now 14-11 overall and 2-3 in Bay League. The Mustangs play Peninsula again at home today at 3:15 p.m.

Boys Tennis Costa’s boys tennis team defeated Redondo 12-6 on Wednesday, giving it a chance to secure a CIF spot . The two teams will face off on May 3 to determine who will advance, with location to be determined. The number-one doubles team of senior Chris Stanbrook and sophomore Tom Wissel won two sets 6-0 and 6-2, and lost one 2-6. The Mustang’s record is now 11-9 overall and 3-4 in Bay Leauge. The boys will play Palos Verdes away on May 2 for their last league match. 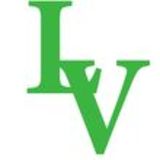