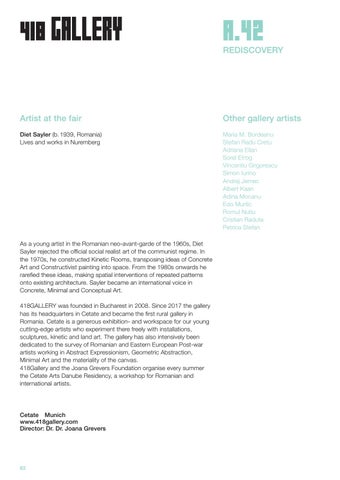 As a young artist in the Romanian neo-avant-garde of the 1960s, Diet Sayler rejected the official social realist art of the communist regime. In the 1970s, he constructed Kinetic Rooms, transposing ideas of Concrete Art and Constructivist painting into space. From the 1980s onwards he rarefied these ideas, making spatial interventions of repeated patterns onto existing architecture. Sayler became an international voice in Concrete, Minimal and Conceptual Art. 418GALLERY was founded in Bucharest in 2008. Since 2017 the gallery has its headquarters in Cetate and became the first rural gallery in Romania. Cetate is a generous exhibition- and workspace for our young cutting-edge artists who experiment there freely with installations, sculptures, kinetic and land art. The gallery has also intensively been dedicated to the survey of Romanian and Eastern European Post-war artists working in Abstract Expressionism, Geometric Abstraction, Minimal Art and the materiality of the canvas. 418Gallery and the Joana Grevers Foundation organise every summer the Cetate Arts Danube Residency, a workshop for Romanian and international artists.