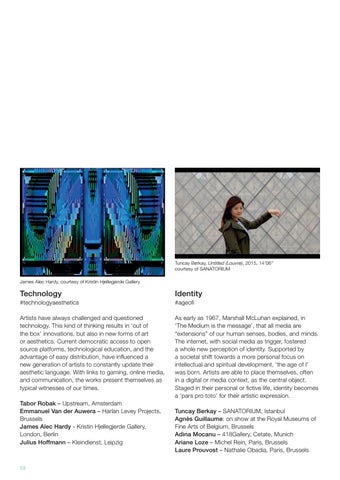 Artists have always challenged and questioned technology. This kind of thinking results in ‘out of the box’ innovations, but also in new forms of art or aesthetics. Current democratic access to open source platforms, technological education, and the advantage of easy distribution, have influenced a new generation of artists to constantly update their aesthetic language. With links to gaming, online media, and communication, the works present themselves as typical witnesses of our times.

As early as 1967, Marshall McLuhan explained, in ‘The Medium is the message’, that all media are “extensions” of our human senses, bodies, and minds. The internet, with social media as trigger, fostered a whole new perception of identity. Supported by a societal shift towards a more personal focus on intellectual and spiritual development, ‘the age of I’ was born. Artists are able to place themselves, often in a digital or media context, as the central object. Staged in their personal or fictive life, identity becomes a ‘pars pro toto’ for their artistic expression.