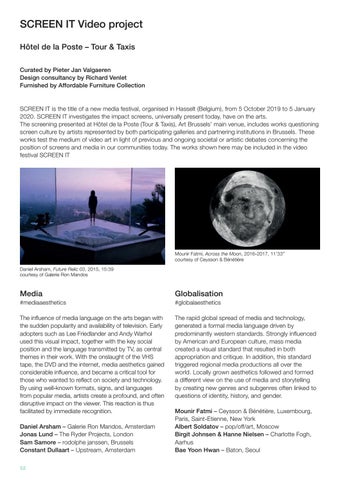 SCREEN IT is the title of a new media festival, organised in Hasselt (Belgium), from 5 October 2019 to 5 January 2020. SCREEN IT investigates the impact screens, universally present today, have on the arts. The screening presented at Hôtel de la Poste (Tour & Taxis), Art Brussels’ main venue, includes works questioning screen culture by artists represented by both participating galleries and partnering institutions in Brussels. These works test the medium of video art in light of previous and ongoing societal or artistic debates concerning the position of screens and media in our communities today. The works shown here may be included in the video festival SCREEN IT

The influence of media language on the arts began with the sudden popularity and availability of television. Early adopters such as Lee Friedlander and Andy Warhol used this visual impact, together with the key social position and the language transmitted by TV, as central themes in their work. With the onslaught of the VHS tape, the DVD and the internet, media aesthetics gained considerable influence, and became a critical tool for those who wanted to reflect on society and technology. By using well-known formats, signs, and languages from popular media, artists create a profound, and often disruptive impact on the viewer. This reaction is thus facilitated by immediate recognition.

The rapid global spread of media and technology, generated a formal media language driven by predominantly western standards. Strongly influenced by American and European culture, mass media created a visual standard that resulted in both appropriation and critique. In addition, this standard triggered regional media productions all over the world. Locally grown aesthetics followed and formed a different view on the use of media and storytelling by creating new genres and subgenres often linked to questions of identity, history, and gender.