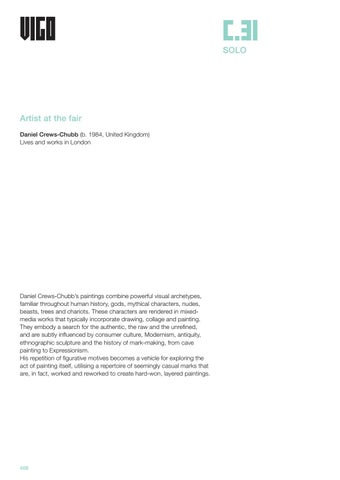 VIGO Artist at the fair Daniel Crews-Chubb (b. 1984, United Kingdom) Lives and works in London

Daniel Crews-Chubbâ&#x20AC;&#x2122;s paintings combine powerful visual archetypes, familiar throughout human history, gods, mythical characters, nudes, beasts, trees and chariots. These characters are rendered in mixedmedia works that typically incorporate drawing, collage and painting. They embody a search for the authentic, the raw and the unrefined, and are subtly influenced by consumer culture, Modernism, antiquity, ethnographic sculpture and the history of mark-making, from cave painting to Expressionism. His repetition of figurative motives becomes a vehicle for exploring the act of painting itself, utilising a repertoire of seemingly casual marks that are, in fact, worked and reworked to create hard-won, layered paintings.