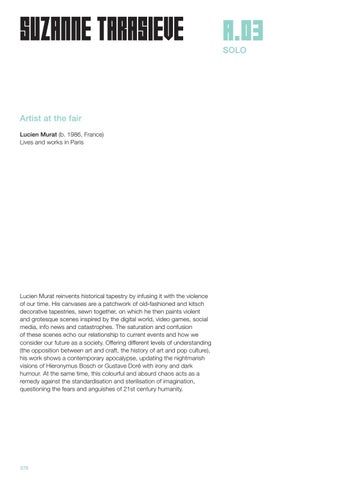 SUZANNE TARASIEVE Artist at the fair Lucien Murat (b. 1986, France) Lives and works in Paris

Lucien Murat reinvents historical tapestry by infusing it with the violence of our time. His canvases are a patchwork of old-fashioned and kitsch decorative tapestries, sewn together, on which he then paints violent and grotesque scenes inspired by the digital world, video games, social media, info news and catastrophes. The saturation and confusion of these scenes echo our relationship to current events and how we consider our future as a society. Offering different levels of understanding (the opposition between art and craft, the history of art and pop culture), his work shows a contemporary apocalypse, updating the nightmarish visions of Hieronymus Bosch or Gustave DorĂŠ with irony and dark humour. At the same time, this colourful and absurd chaos acts as a remedy against the standardisation and sterilisation of imagination, questioning the fears and anguishes of 21st century humanity.