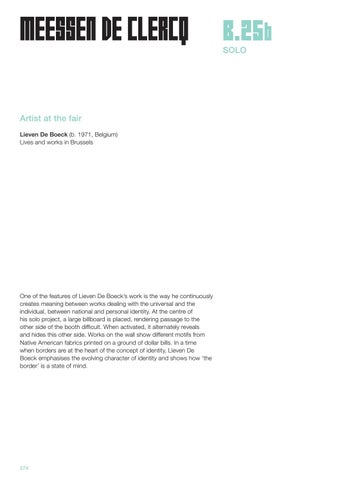 One of the features of Lieven De Boeck’s work is the way he continuously creates meaning between works dealing with the universal and the individual, between national and personal identity. At the centre of his solo project, a large billboard is placed, rendering passage to the other side of the booth difficult. When activated, it alternately reveals and hides this other side. Works on the wall show different motifs from Native American fabrics printed on a ground of dollar bills. In a time when borders are at the heart of the concept of identity, Lieven De Boeck emphasises the evolving character of identity and shows how ‘the border’ is a state of mind.