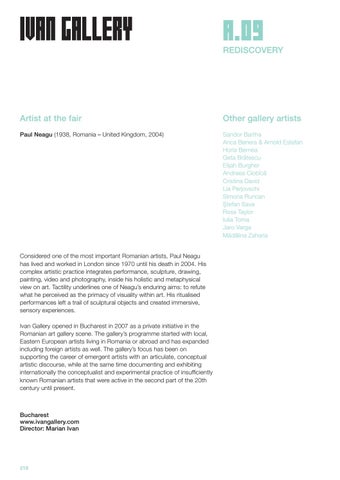 Considered one of the most important Romanian artists, Paul Neagu has lived and worked in London since 1970 until his death in 2004. His complex artistic practice integrates performance, sculpture, drawing, painting, video and photography, inside his holistic and metaphysical view on art. Tactility underlines one of Neagu’s enduring aims: to refute what he perceived as the primacy of visuality within art. His ritualised performances left a trail of sculptural objects and created immersive, sensory experiences. Ivan Gallery opened in Bucharest in 2007 as a private initiative in the Romanian art gallery scene. The gallery’s programme started with local, Eastern European artists living in Romania or abroad and has expanded including foreign artists as well. The gallery’s focus has been on supporting the career of emergent artists with an articulate, conceptual artistic discourse, while at the same time documenting and exhibiting internationally the conceptualist and experimental practice of insufficiently known Romanian artists that were active in the second part of the 20th century until present.