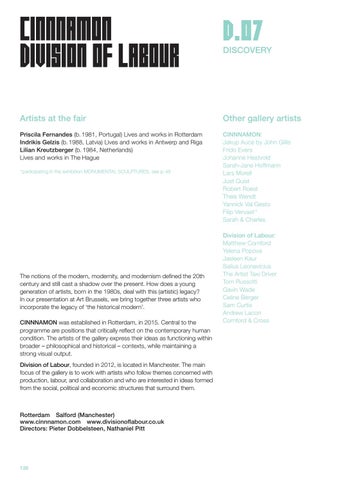 The notions of the modern, modernity, and modernism defined the 20th century and still cast a shadow over the present. How does a young generation of artists, born in the 1980s, deal with this (artistic) legacy? In our presentation at Art Brussels, we bring together three artists who incorporate the legacy of ‘the historical modern’. CINNNAMON was established in Rotterdam, in 2015. Central to the programme are positions that critically reflect on the contemporary human condition. The artists of the gallery express their ideas as functioning within broader – philosophical and historical – contexts, while maintaining a strong visual output. Division of Labour, founded in 2012, is located in Manchester. The main focus of the gallery is to work with artists who follow themes concerned with production, labour, and collaboration and who are interested in ideas formed from the social, political and economic structures that surround them.