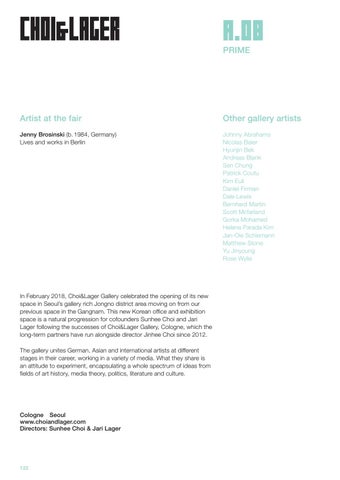 Jenny Brosinski (b. 1984, Germany) Lives and works in Berlin

In February 2018, Choi&Lager Gallery celebrated the opening of its new space in Seoul’s gallery rich Jongno district area moving on from our previous space in the Gangnam. This new Korean office and exhibition space is a natural progression for cofounders Sunhee Choi and Jari Lager following the successes of Choi&Lager Gallery, Cologne, which the long-term partners have run alongside director Jinhee Choi since 2012. The gallery unites German, Asian and international artists at different stages in their career, working in a variety of media. What they share is an attitude to experiment, encapsulating a whole spectrum of ideas from fields of art history, media theory, politics, literature and culture.