A New Light in Kalighat 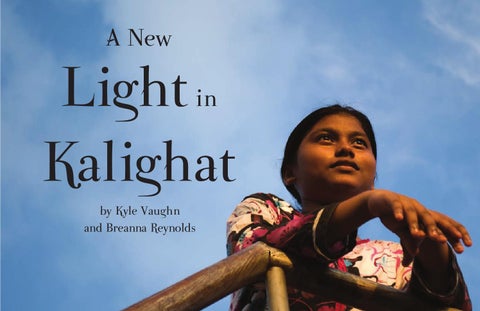 Light in Kalighat by Kyle Vaughn and Breanna Reynolds

A New Light in

A New Light in Kalighat collects the artwork, writing, and life stories of the children served by New Light in Kolkata, India, along with their portraits. You can learn more about New Light and how you can help by visiting www . newlightindia . org “The civic society has to be more engaged to inspire change.” —Urmi Basu

Down an unassuming, narrow alleyway in south Kolkata, you’ll find one of the most special places on earth, a place where hope finds embodiment in the smiles of children. You can hear it in their songs and their laughter and see it in the brightness of their artwork and in the positivity of their words. Their situation does not seem like one that would end in hope: they are the children of sex-workers, they are victims of trafficking, they are untouchables. Their neighborhood is Kalighat, Kolkata’s oldest red-light district. Indeed it is a place that is a “cacophony of human and animal clamour,” as novelist Chitra Divakaruni describes it. But high above the many sorrowful stories unfolding in the brothels in Kalighat, you’ll also see the energetic flight of kites. And up on the second level of a concrete building at the end of that alleyway, you’ll find New Light. New Light is a Kalighat-based organization, founded and run by Urmi Basu. New Light does a variety of work, from HIV / AIDS prevention to providing microcredit, but much of its work centers on the children of Kalighat: the children of sex-workers, victims of trafficking, and children from the Dalit community. Whether it be at New Light’s Kalighat Centre, Soma Home (their residential facility), or Dalit Centre, these children find a place where they can receive safe harbor, food, healthcare, shelter, and education. Urmi is an inspiring presence at New Light, where she works with a staff comprised of experienced NGO workers and local volunteers. Urmi’s vision and

compassion flow into each of the lives New Light touches. “Nothing is impossible when you appeal to the human soul with genuine cause,” Urmi once said. In the summer of 2012, we had the opportunity to work with the children of New Light and were amazed by the stories of these children, by their cheerful artwork, and the skill, admiration, and appreciation they expressed in their writing. We felt that one of the best ways to tell the story of New Light was to show you their smiles, to show you the stories in their eyes (which hold both the difficulty of the past and the promise of their future), and to show you the beautiful work they do, no doubt influenced by all they have received as a reult of New Light’s work. Kyle Vaughn and Breanna Reynolds Dear friends, when you pick up this book, it is my belief that you would instantly touch the lives of hundreds of children, not only in India but around the world who are trying to make a leap of faith from darkness to light. I feel singularly touched, moved, and inspired by their stories to continue searching for ways that would allow the children of New Light to bloom as completely as the rare blossoms they are. My deepest gratitude to Breanna and Kyle for bringing them this extraordinary gift of love, joy, and hope. In touching these pages and sharing these stories I hope you would be equally inspired. Thank you. Urmi Basu

Like many of the children that New Light serves, Nasrin finds many of her basic needs, such as food, clothes, shelter, education, and safety, met by New Light. Nasrinâ&amp;#x20AC;&amp;#x2122;s mother works in the sex trade in Kalighat, the oldest red light district in Kolkata. Now that Nasrinâ&amp;#x20AC;&amp;#x2122;s needs have been met by New Light, she feels empowered to follow her dream of becoming a dance teacher.

Swastika found safe harbor at New Light when faced with an abusive situation at home. Now, New Light is able to provide her with a proper education as well as counseling. Having made much progress, she shows great care for the younger children.

Puja says she hopes to build a school for poor children someday.

New Light also cares for very young children. Their identities have been withheld here to provide them with as much protection as possible.

Amirul, having come from an environment where he sometimes went unfed, now thrives at New Light. He is studying at an English medium school and hopes to become a drama teacher.

Munna loves playing football and hopes someday to open a football training academy. With the money he would make, he dreams of building a house for his mother to help her get out of the sex trade and out of their neighborhood.

Anjali is a resident of Soma Home, New Light’s residential facility for at-risk girls. Anjali’s mother and grandmother both work in the sex trade. At Soma home, Anjali has found an escape from that cycle and has been able to enroll in an English medium school, receive counseling, and participate in dance movement therapy. In her essay, she proclaims “Urmi Aunty” as her inspiration, noting that she desires to help others just as Urmi does, though she hopes to do so by being a doctor and opening a hospital that offers free medical treatment.

Once a victim of trafficking, Lata found safe harbor at Soma Home. She hopes to become a policewoman and help others who have been victimized by human trafficking. In her essay, Lata recognizes Sarita, her counselor, as the strongest person she knows. â&amp;#x20AC;&amp;#x153;I consider her to be my friend, philosopher and guide,â&amp;#x20AC;? Lata says.

Rani writes that her favorite song, “Meri Maa,” makes her feel closer to her mother. Rani’s mother, originally from Nepal, was a victim of human trafficking. Thankfully, she was able to seek New Light’s help in removing her daughter from the dangerous cycle that often perpetuates from such situations.

Barsha’s mother, who was a sex worker in Kalighat, died when she was very young, and her father was too ill to care for Barsha. She has thrived at Soma Home, and inspired by her dance therapy classes, she hopes to be an actress someday. In her essay, Barsha says, “Happy moments are no less than precious stones to me.”

Jaba is a caring and cheerful resident at Soma Home. On her right hand, you will see a rakhi, a sacred thread, worn by brothers, sisters, and cousins during the Raksha Bandhan festival to represent their love and prayers of well-being. Jaba hopes to become a doctor and build a hospital, which you can see here in her drawing.

Inspired by her dance therapy classes at Soma Home, Madhabi hopes to become a choreographer.

Like so many children that New Light serves, Nargis came from a background where her motherâ&amp;#x20AC;&amp;#x2122;s work in the sex trade and her fatherâ&amp;#x20AC;&amp;#x2122;s abusive and alcoholic nature provided a constant atmosphere of danger and neglect. Now at Soma Home, Nargis receives so much care and support: food, shelter, clothes, education, counseling, dance therapy, even boxing training. Nargis hopes to be a lawyer.

New Light also operates a centre for Dalit children. Dalits have traditionally been considered outcasts in places such as India where the caste system is practiced. Dalits are often considered “untouchable” because of occupations that are considered unclean. New Light’s Dalit Centre serves the children of Kolkata’s crematory workers. Without the help of New Light, many of these children would not receive an education, as they are often shunned from school. Now that Raja has an opportunity for education, he hopes to become a doctor.

Like many in the Dalit community, Tanishaâ&amp;#x20AC;&amp;#x2122;s life is complicated by poverty and a father that is alcoholic. Tanisha dreams of ending that cycle. She loves to draw and wants to be a writer.

About the Author-Photographers Kyle Vaughn is a teacher, writer, and photographer. His poetry has appeared in numerous literary journals and anthologies, including Poetry East, The Sentence, Confrontation, Drunken Boat, and Firewheel Editions’ Introduction to the Prose Poem. His prose has appeared in the English Journal, where he won the Paul and Kate Farmer Award for his article “Reading the Literature of War: A Global Perspective on Ethics.” His photography has appeared in Annalemma and Holon and has been featured by the Impossible Project. Kyle teaches Creative Writing and World Literature. He can be contacted at kylev75@gmail.com. After serving as a Fulbright exchange teacher in India, Breanna Reynolds was nominated Resident Director of the Educational Seminar India Summer Teaching Program for four years. Breanna developed a love for the culture and people of India as she taught students, supervised teachers, and conducted visitations in over 20 different academic institutions in Delhi and Kolkata. She received her M.Ed. in the International Educational Development Program at Boston University. She is a passionate advocate for social transformation through educational empowerment and loves inspired connection through the sharing of art, photography, and personal stories. Breanna teaches IB Language &amp; Literature for THINK Global School. Contact her at breanna.reynolds@yahoo.com.

Special Thanks Kyle and Breanna would like to thank: Urmi, George, Sima, and all of the staff at New Light; the beautiful children of New Light; Elise, Kyler, Zara, and all at the American Councils for International Education; Jen Brown and Jen Gibson at the U.S. State Department; Sister Cyril; Fulbright; Sumanta, Shevanti, and all at the United States-India Education Foundation; Nicholas Kristof and Sheryl WuDunn for their inspiring work with Half the Sky. Kyle would like to thank: My wife, Natalie, and my children, Eli and Charlotte, for your love and support and for allowing me the five weeks in India; Breanna Reynolds, for her inspiring example as we worked with the kids and for her expert food advice—may you find momos and Mexican food on every continent; Beautiful India, and especially Kolkata—thank you for sharing your joy with me. Breanna would like to thank: Dad, for teaching me how to chase a dream. I miss you; Ron: you are my heart; Ben and Beave, you’re welcome for being your sister; my partner-incrime, Kyle Vaughn: your endless imagination and heart made this project a reality—I appreciate you; my students around the world, thank you for bettering it; India—your people, your stories, and your magic. Thank you for teaching me what it means to be human. I, forever, touch your feet.

Also thanks to: Ana Rosenthal of the Hockaday School for her design advice; these students and faculty of THINK Global School for photo selection assistance and research: Nick Martino (faculty), Luisa Beirl, Aâ&amp;#x20AC;&amp;#x2122;ntonia Benson, Willem Brikkenaar van Dijk, Bailey Dobier, Gijs de Jong, Yada Pruksachatkun, Ahmad Jawed Sakhi, Charis Smuthkochorn, Mark Surnin, Pema Tshering, David Navarro; and Melanie Hamil of Impact Printing and Graphics in Dallas, Texas, for her printing expertise. Support for this project was provided by the Educational Seminars Program. The program is sponsored by the Bureau of Educational and Cultural Affairs of the U.S. Department of State (ECA) and is administered by American Councils for International Education: ACTR/ACCELS. ECA and American Councils are not responsible for the views expressed herein. This book was designed using Adobe InDesign and Adobe Photoshop. The body text is set in Minion Pro and title work is set in Parma Petit. It was printed by Impact Printing and Graphics in Dallas, Texas. You can learn more about New Light by visiting www.newlightindia.org Sarbina

A New Light in Kalighat

A New Light in Kalighat collects the artwork, writing, and life stories of the children served by New Light in Kolkata, India, along with their portraits. 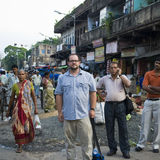