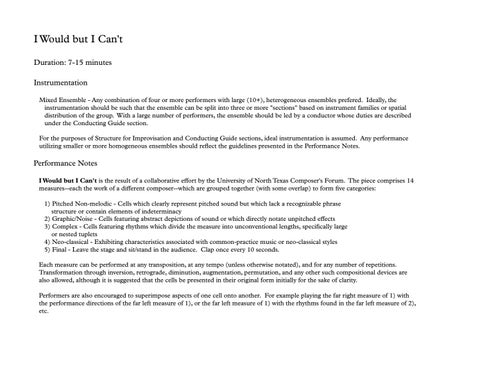 I Would but I Can't Duration: 7-15 minutes Instrumentation Mixed Ensemble - Any combination of four or more performers with large (10+), heterogeneous ensembles prefered. Ideally, the instrumentation should be such that the ensemble can be split into three or more "sections" based on instrument families or spatial distribution of the group. With a large number of performers, the ensemble should be led by a conductor whose duties are described under the Conducting Guide section. For the purposes of Structure for Improvisation and Conducting Guide sections, ideal instrumentation is assumed. Any performance utilizing smaller or more homogeneous ensembles should reﬂect the guidelines presented in the Performance Notes.

Performance Notes I Would but I Can't is the result of a collaborative eﬀort by the University of North Texas Composer's Forum. The piece comprises 14 measures--each the work of a diﬀerent composer--which are grouped together (with some overlap) to form ﬁve categories: 1) Pitched Non-melodic - Cells which clearly represent pitched sound but which lack a recognizable phrase structure or contain elements of indeterminacy 2) Graphic/Noise - Cells featuring abstract depictions of sound or which directly notate unpitched eﬀects 3) Complex - Cells featuring rhythms which divide the measure into unconventional lengths, speciﬁcally large or nested tuplets 4) Neo-classical - Exhibiting characteristics associated with common-practice music or neo-classical styles 5) Final - Leave the stage and sit/stand in the audience. Clap once every 10 seconds. Each measure can be performed at any transposition, at any tempo (unless otherwise notated), and for any number of repetitions. Transformation through inversion, retrograde, diminution, augmentation, permutation, and any other such compositional devices are also allowed, although it is suggested that the cells be presented in their original form initially for the sake of clarity. Performers are also encouraged to superimpose aspects of one cell onto another. For example playing the far right measure of 1) with the performance directions of the far left measure of 1), or the far left measure of 1) with the rhythms found in the far left measure of 2), etc.

Structure for Improvisation Designed by the 14 contributing composers, the following structure is to be used as a guide for performance with lengths representing relative duration:

A - Full Ensemble: All performers enter on a non-transposed cell from 1). The performer's selection of cells should emphasize one group of measures as speciﬁed by the conductor (see Conductor's Guide), with interjections from other groups allowed but infrequent. Movement from one group to another should follow the diagram on the right. Over the course of A, sections of the ensemble can be faded in and out by the conductor (CG), eventually paring the performers down to one section at the start of B. B - Sectional: Once the ensemble is reduced to a single section, each fade in of a set of performers should be result in the fading out of the previously featured section. Guidelines for the selection of cells remains the same as in A. C - Solo: When given the signal to proceed to C (CG), the current section should fade to a single performer. Cell choice in this and all subsequent sections is left entirely to the performer. Transitions from one soloist to another should be cued by the conductor as a right-hand only gesture. The new soloist is free to enter at any point after they are cued, upon which the previous soloist should fade out if they have not done so already. The previous soloist is free to fade out at any time after cueing the new soloist, but at no point should they intentionally provide an entrance for the new soloist (e.g. by suspension, sustain, cadence, etc.). D - Build: Once given the signal to proceed to D, soloists should no longer fade out on the entrance of a new performer. Re-entries should be left to the discretion of the performer, however the conductor should take an active role in insuring a gradual build. As in C, choice of cell is left entirely up to the performer, although it is encouraged that the performer continue to follow the above diagram when moving between groups. Intensity should grow with each entrance, building to climax at the beginning of F. It is suggested that the conductor provide additional gestures or begin conducting in a metered fashion so as to match the intensity of the ensemble. F - Final: Once the full ensemble has re-entered, the conductor is free to begin 5) at any point, after which the ensemble gradually joins the conductor in 5). Movement into the audience should be slow and deliberate. Performers may leave their instruments on stage or bring them out into the audience so long as doing so does not inhibit their ability to play 5). Once the ﬁnal performer has left the stage, each person will repeat 5) exactly ﬁve more times before standing still and waiting for all performers to ﬁnish.

Right-Hand Only Gestures The right hand is responsible for selecting portions of the ensemble, communicating fades, and indicating the group of measures to be emphasized at any point during A or B. Selection - A pointing gesture sweeping from left to right. Selection will always be followed by at least one of the other right-hand only gestures. Fade In/Out - Upward movement of the hand with palm facing up for Fade In and downward movement of the hand with palm facing down for Fade Out. Fades should begin soon after the gesture is given, and should occur gradually and asynchronously within the selected section. Group Change - Short downwards movement of the new group number close to the center of the body. As with the fade, change of emphasis from one group to the next should occur gradually and asynchronously within the selected section. If no selection is given, the new group applies to the whole ensemble. Motion between groups should follow the diagram shown in the structure for improvisation.

Left-Hand Only Gestures The left hand is responsible for communicating dynamics, indicating mood/interpretation, and other fullďŹ lling other traditional conductor roles. Left-hand gestures are directional, meaning that they can be applied to various sections of the ensemble without use of the selection gesture (as in general conducting practice).

I Would but I Can't for Mixed Ensemble UNT Composer's Forum I Would but I Can't

I Would but I Can't