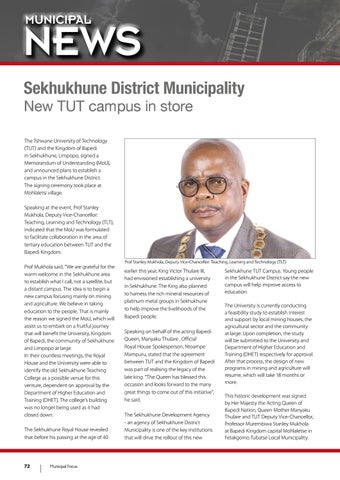 NEWS Sekhukhune District Municipality New TUT campus in store The Tshwane University of Technology (TUT) and the Kingdom of Bapedi in Sekhukhune, Limpopo, signed a Memorandum of Understanding (MoU), and announced plans to establish a campus in the Sekhukhune District. The signing ceremony took place at Mohlaletsi village. Speaking at the event, Prof Stanley Mukhola, Deputy Vice-Chancellor: Teaching, Learning and Technology (TLT), indicated that the MoU was formulated to facilitate collaboration in the area of tertiary education between TUT and the Bapedi Kingdom. Prof Mukhola said, “We are grateful for the warm welcome in the Sekhukhune area to establish what I call, not a satellite, but a distant campus. The idea is to begin a new campus focusing mainly on mining and agriculture. We believe in taking education to the people. That is mainly the reason we signed the MoU, which will assist us to embark on a fruitful journey that will benefit the University, Kingdom of Bapedi, the community of Sekhukhune and Limpopo at large. In their countless meetings, the Royal House and the University were able to identify the old Sekhukhune Teaching College as a possible venue for this venture, dependent on approval by the Department of Higher Education and Training (DHET). The college’s building was no longer being used as it had closed down. The Sekhukhune Royal House revealed that before his passing at the age of 40

earlier this year, King Victor Thulare III, had envisioned establishing a university in Sekhukhune. The King also planned to harness the rich mineral resources of platinum metal groups in Sekhukhune to help improve the livelihoods of the Bapedi people. Speaking on behalf of the acting Bapedi Queen, Manyaku Thulare , Official Royal House Spokesperson, Ntoampe Mampuru, stated that the agreement between TUT and the Kingdom of Bapedi was part of realising the legacy of the late king. “The Queen has blessed this occasion and looks forward to the many great things to come out of this initiative”, he said. The Sekhukhune Development Agency - an agency of Sekhukhune District Municipality is one of the key institutions that will drive the rollout of this new

Sekhukhune TUT Campus. Young people in the Sekhukhune District say the new campus will help improve access to education. The University is currently conducting a feasibility study to establish interest and support by local mining houses, the agricultural sector and the community at large. Upon completion, the study will be submitted to the University and Department of Higher Education and Training (DHET) respectively for approval. After that process, the design of new programs in mining and agriculture will resume, which will take 18 months or more. This historic development was signed by Her Majesty the Acting Queen of Bapedi Nation, Queen Mother Manyaku Thulare and TUT Deputy Vice-Chancellor, Professor Murembiwa Stanley Mukhola at Bapedi Kingdom capital Mohlaletse in Fetakgomo Tubatse Local Municipality.