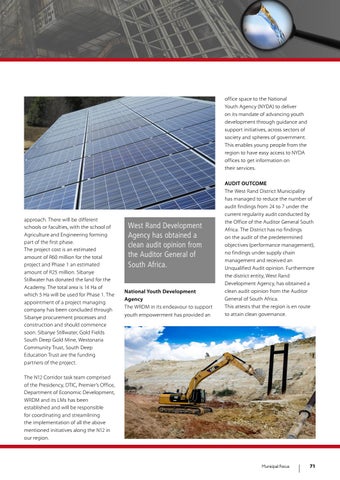 office space to the National Youth Agency (NYDA) to deliver on its mandate of advancing youth development through guidance and support initiatives, across sectors of society and spheres of government. This enables young people from the region to have easy access to NYDA offices to get information on their services.

approach. There will be different schools or faculties, with the school of Agriculture and Engineering forming part of the first phase. The project cost is an estimated amount of R60 million for the total project and Phase 1 an estimated amount of R25 million. Sibanye Stillwater has donated the land for the Academy. The total area is 14 Ha of which 5 Ha will be used for Phase 1. The appointment of a project managing company has been concluded through Sibanye procurement processes and construction and should commence soon. Sibanye Stillwater, Gold Fields South Deep Gold Mine, Westonaria Community Trust, South Deep Education Trust are the funding partners of the project.

AUDIT OUTCOME The West Rand District Municipality has managed to reduce the number of audit findings from 24 to 7 under the current regularity audit conducted by the Office of the Auditor General South Africa. The District has no findings on the audit of the predetermined objectives (performance management), no findings under supply chain management and received an Unqualified Audit opinion. Furthermore the district entity, West Rand Development Agency, has obtained a clean audit opinion from the Auditor General of South Africa. This attests that the region is en route to attain clean governance.

The N12 Corridor task team comprised of the Presidency, DTIC, Premier’s Office, Department of Economic Development, WRDM and its LMs has been established and will be responsible for coordinating and streamlining the implementation of all the above mentioned initiatives along the N12 in our region.