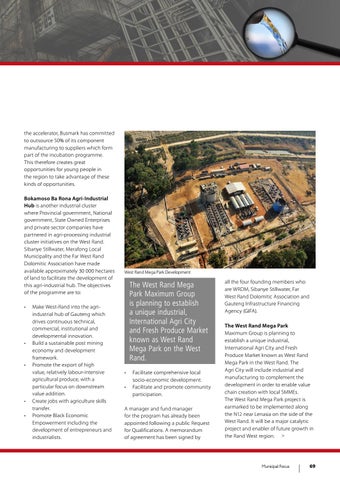 the accelerator, Busmark has committed to outsource 50% of its component manufacturing to suppliers which form part of the incubation programme. This therefore creates great opportunities for young people in the region to take advantage of these kinds of opportunities. Bokamoso Ba Rona Agri-Industrial Hub is another industrial cluster where Provincial government, National government, State Owned Enterprises and private sector companies have partnered in agri-processing industrial cluster initiatives on the West Rand. Sibanye Stillwater, Merafong Local Municipality and the Far West Rand Dolomitic Association have made available approximately 30 000 hectares of land to facilitate the development of this agri-industrial hub. The objectives of the programme are to: •

A manager and fund manager for the program has already been appointed following a public Request for Qualifications. A memorandum of agreement has been signed by