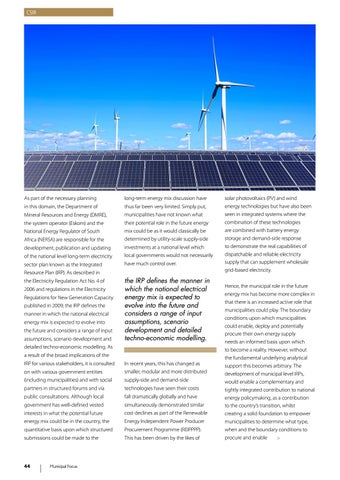 As part of the necessary planning

in this domain, the Department of

municipalities have not known what

the system operator (Eskom) and the

their potential role in the future energy

mix could be as it would classically be

Africa (NERSA) are responsible for the

investments at a national level which

of the national level long-term electricity

local governments would not necessarily

sector plan known as the Integrated

have much control over.

Resource Plan (IRP). As described in the Electricity Regulation Act No. 4 of 2006 and regulations in the Electricity Regulations for New Generation Capacity published in 2009; the IRP defines the manner in which the national electrical energy mix is expected to evolve into the future and considers a range of input assumptions, scenario development and

the IRP defines the manner in which the national electrical energy mix is expected to evolve into the future and considers a range of input assumptions, scenario development and detailed techno-economic modelling.

detailed techno-economic modelling. As a result of the broad implications of the IRP for various stakeholders, it is consulted

In recent years, this has changed as

on with various government entities

(including municipalities) and with social

partners in structured forums and via

technologies have seen their costs

fall dramatically globally and have

interests in what the potential future

cost declines as part of the Renewable

energy mix could be in the country, the

quantitative basis upon which structured

submissions could be made to the

This has been driven by the likes of

solar photovoltaics (PV) and wind energy technologies but have also been seen in integrated systems where the combination of these technologies are combined with battery energy storage and demand-side response to demonstrate the real capabilities of dispatchable and reliable electricity supply that can supplement wholesale grid-based electricity. Hence, the municipal role in the future energy mix has become more complex in that there is an increased active role that municipalities could play. The boundary conditions upon which municipalities could enable, deploy and potentially procure their own energy supply needs an informed basis upon which to become a reality. However, without the fundamental underlying analytical support this becomes arbitrary. The development of municipal level IRPs, would enable a complementary and tightly integrated contribution to national energy policymaking, as a contribution to the country’s transition, whilst creating a solid foundation to empower municipalities to determine what type, when and the boundary conditions to procure and enable