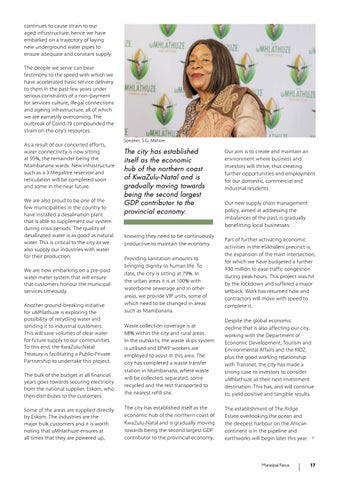 continues to cause strain to our aged infrastructure, hence we have embarked on a trajectory of laying new underground water pipes to ensure adequate and constant supply. The people we serve can bear testimony to the speed with which we have accelerated basic service delivery to them in the past few years under serious constraints of a non-payment for services culture, illegal connections and ageing infrastructure, all of which we are earnestly overcoming. The outbreak of Covid-19 compounded the strain on the city’s resources. As a result of our concerted efforts, water connectivity is now sitting at 95%, the remainder being the Ntambanana wards. New infrastructure such as a 3 Megalitre reservoir and reticulation will be completed soon and some in the near future. We are also proud to be one of the few municipalities in the country to have installed a desalination plant that is able to supplement our system during crisis periods. The quality of desalinated water is as good as natural water. This is critical to the city as we also supply our industries with water for their production. We are now embarking on a pre-paid water meter system that will ensure that customers honour the municipal services timeously. Another ground-breaking initiative for uMhlathuze is exploring the possibility of recycling water and sending it to industrial customers. This will save volumes of clear water for future supply to our communities. To this end, the KwaZulu-Natal Treasury is facilitating a Public-Private Partnership to undertake this project. The bulk of the budget in all financial years goes towards securing electricity from the national supplier, Eskom, who then distributes to the customers. Some of the areas are supplied directly by Eskom. The industries are the major bulk customers and it is worth noting that uMhlathuze ensures at all times that they are powered up,

The city has established itself as the economic hub of the northern coast of KwaZulu-Natal and is gradually moving towards being the second largest GDP contributor to the provincial economy.

knowing they need to be continuously productive to maintain the economy. Providing sanitation amounts to bringing dignity to human life. To date, the city is sitting at 79%. In the urban areas it is at 100% with waterborne sewerage and in other areas, we provide VIP units, some of which need to be changed in areas such as Ntambanana.

Our aim is to create and maintain an environment where business and investors will thrive, thus creating further opportunities and employment for our domestic, commercial and industrial residents. Our new supply chain management policy, aimed at addressing the imbalances of the past, is gradually benefitting local businesses. Part of further activating economic activities in the eSikhaleni precinct is the expansion of the main intersection, for which we have budgeted a further R30 million to ease traffic congestion during peak hours. This project was hit by the lockdown and suffered a major setback. Work has resumed now and contractors will move with speed to complete it.

Waste collection coverage is at 68% within the city and rural areas. In the outskirts, the waste skips system is utilised and EPWP workers are employed to assist in this area. The city has completed a waste transfer station in Ntambanana, where waste will be collected, separated, some recycled and the rest transported to the nearest refill site.

Despite the global economic decline that is also affecting our city, working with the Department of Economic Development, Tourism and Environmental Affairs and the RIDZ, plus the good working relationship with Transnet, the city has made a strong case to investors to consider uMhlathuze as their next investment destination. This has, and will continue to, yield positive and tangible results.

The city has established itself as the economic hub of the northern coast of KwaZulu-Natal and is gradually moving towards being the second largest GDP contributor to the provincial economy.

The establishment of The Ridge Estate overlooking the ocean and the deepest harbour on the African continent is in the pipeline and earthworks will begin later this year.