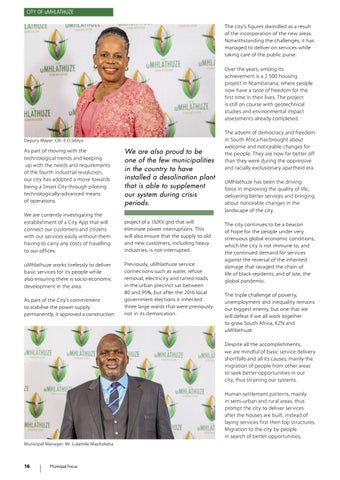 CITY OF uMHLATHUZE The city’s figures dwindled as a result of the incorporation of the new areas. Notwithstanding the challenges, it has managed to deliver on services while taking care of the public purse. Over the years, among its achievement is a 2 500 housing project in Ntambanana, where people now have a taste of freedom for the first time in their lives. The project is still on course with geotechnical studies and environmental impact assessments already completed.

As part of moving with the technological trends and keeping up with the needs and requirements of the fourth industrial revolution, our city has adopted a move towards being a Smart City through piloting technologically-advanced means of operations. We are currently investigating the establishment of a City App that will connect our customers and citizens with our services easily without them having to carry any costs of travelling to our offices. uMhlathuze works tirelessly to deliver basic services for its people while also ensuring there is socio-economic development in the area. As part of the City’s commitment to stabilise the power supply permanently, it approved a construction

We are also proud to be one of the few municipalities in the country to have installed a desalination plant that is able to supplement our system during crisis periods. project of a 132KV grid that will eliminate power interruptions. This will also ensure that the supply to old and new customers, including heavy industries, is not interrupted. Previously, uMhlathuze service connections such as water, refuse removal, electricity and tarred roads in the urban precinct sat between 80 and 95%, but after the 2016 local government elections it inherited three large wards that were previously not in its demarcation.

The advent of democracy and freedom in South Africa has brought about welcome and noticeable changes for the people. They are now far better off than they were during the oppressive and racially exclusionary apartheid era. UMhlathuze has been the driving force in improving the quality of life, delivering better services and bringing about noticeable changes in the landscape of the city. The city continues to be a beacon of hope for the people under very strenuous global economic conditions, which the city is not immune to, and the continued demand for services against the reversal of the inherited damage that ravaged the chain of life of black residents, and of late, the global pandemic. The triple challenge of poverty, unemployment and inequality remains our biggest enemy, but one that we will defeat if we all work together to grow South Africa, KZN and uMhlathuze. Despite all the accomplishments, we are mindful of basic service delivery shortfalls and all its causes, mainly the migration of people from other areas to seek better opportunities in our city, thus straining our systems. Human settlement patterns, mainly in semi-urban and rural areas, thus prompt the city to deliver services after the houses are built, instead of laying services first then top structures. Migration to the city by people in search of better opportunities,