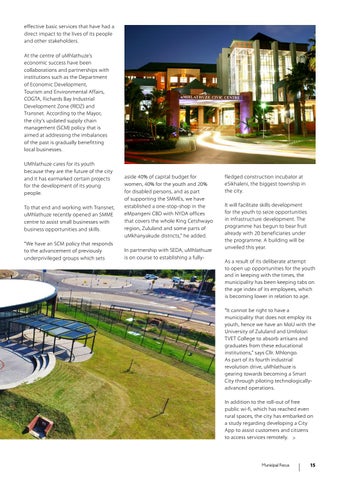 effective basic services that have had a direct impact to the lives of its people and other stakeholders. At the centre of uMhlathuze’s economic success have been collaborations and partnerships with institutions such as the Department of Economic Development, Tourism and Environmental Affairs, COGTA, Richards Bay Industrial Development Zone (RIDZ) and Transnet. According to the Mayor, the city’s updated supply chain management (SCM) policy that is aimed at addressing the imbalances of the past is gradually benefitting local businesses. UMhlathuze cares for its youth because they are the future of the city and it has earmarked certain projects for the development of its young people. To that end and working with Transnet, uMhlathuze recently opened an SMME centre to assist small businesses with business opportunities and skills. “We have an SCM policy that responds to the advancement of previously underprivileged groups which sets

aside 40% of capital budget for women, 40% for the youth and 20% for disabled persons, and as part of supporting the SMMEs, we have established a one-stop-shop in the eMpangeni CBD with NYDA offices that covers the whole King Cetshwayo region, Zululand and some parts of uMkhanyakude districts,” he added. In partnership with SEDA, uMhlathuze is on course to establishing a fully-

fledged construction incubator at eSikhaleni, the biggest township in the city. It will facilitate skills development for the youth to seize opportunities in infrastructure development. The programme has begun to bear fruit already with 20 beneficiaries under the programme. A building will be unveiled this year. As a result of its deliberate attempt to open up opportunities for the youth and in keeping with the times, the municipality has been keeping tabs on the age index of its employees, which is becoming lower in relation to age. “It cannot be right to have a municipality that does not employ its youth, hence we have an MoU with the University of Zululand and Umfolozi TVET College to absorb artisans and graduates from these educational institutions,” says Cllr. Mhlongo. As part of its fourth industrial revolution drive, uMhlathuze is gearing towards becoming a Smart City through piloting technologicallyadvanced operations. In addition to the roll-out of free public wi-fi, which has reached even rural spaces, the city has embarked on a study regarding developing a City App to assist customers and citizens to access services remotely.