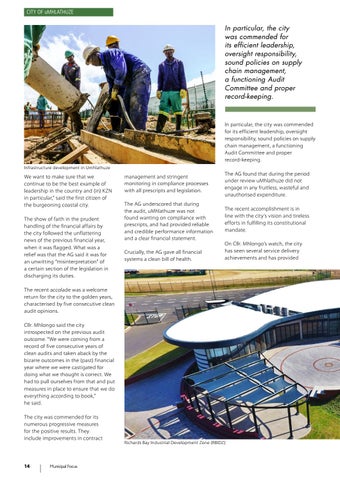 In particular, the city was commended for its efficient leadership, oversight responsibility, sound policies on supply chain management, a functioning Audit Committee and proper record-keeping.

In particular, the city was commended for its efficient leadership, oversight responsibility, sound policies on supply chain management, a functioning Audit Committee and proper record-keeping. Infrastructure development in Umhlathuze

We want to make sure that we continue to be the best example of leadership in the country and (in) KZN in particular,” said the first citizen of the burgeoning coastal city. The show of faith in the prudent handling of the financial affairs by the city followed the unflattering news of the previous financial year, when it was flagged. What was a relief was that the AG said it was for an unwitting “misinterpretation” of a certain section of the legislation in discharging its duties.

management and stringent monitoring in compliance processes with all prescripts and legislation.

The AG found that during the period under review uMhlathuze did not engage in any fruitless, wasteful and unauthorised expenditure.

The AG underscored that during the audit, uMhlathuze was not found wanting on compliance with prescripts, and had provided reliable and credible performance information and a clear financial statement.

The recent accomplishment is in line with the city’s vision and tireless efforts in fulfilling its constitutional mandate.

Crucially, the AG gave all financial systems a clean bill of health.

On Cllr. Mhlongo’s watch, the city has seen several service delivery achievements and has provided

The recent accolade was a welcome return for the city to the golden years, characterised by five consecutive clean audit opinions. Cllr. Mhlongo said the city introspected on the previous audit outcome. “We were coming from a record of five consecutive years of clean audits and taken aback by the bizarre outcomes in the (past) financial year where we were castigated for doing what we thought is correct. We had to pull ourselves from that and put measures in place to ensure that we do everything according to book,” he said. The city was commended for its numerous progressive measures for the positive results. They include improvements in contract