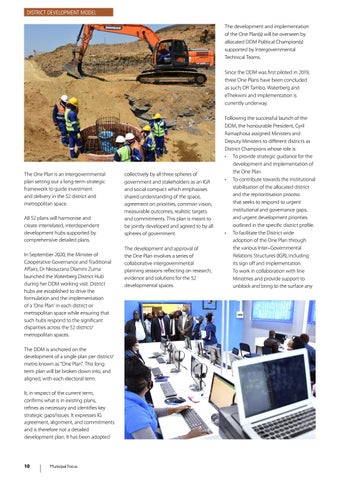 DISTRICT DEVELOPMENT MODEL The development and implementation of the One Plan(s) will be overseen by allocated DDM Political Champion(s) supported by Intergovernmental Technical Teams. Since the DDM was first piloted in 2019, three One Plans have been concluded as such; OR Tambo, Waterberg and eThekwini and implementation is currently underway.

The One Plan is an intergovernmental plan setting out a long-term strategic framework to guide investment and delivery in the 52 district and metropolitan space. All 52 plans will harmonise and create interrelated, interdependent development hubs supported by comprehensive detailed plans. In September 2020, the Minister of Cooperative Governance and Traditional Affairs, Dr Nkosazana Dlamini Zuma launched the Waterberg District Hub during her DDM working visit. District hubs are established to drive the formulation and the implementation of a ‘One Plan’ in each district or metropolitan space while ensuring that such hubs respond to the significant disparities across the 52 district/ metropolitan spaces. The DDM is anchored on the development of a single plan per district/ metro known as “One Plan”. This long term plan will be broken down into, and aligned, with each electoral term. It, in respect of the current term, confirms what is in existing plans, refines as necessary and identifies key strategic gaps/issues. It expresses IG agreement, alignment, and commitments and is therefore not a detailed development plan. It has been adopted

collectively by all three spheres of government and stakeholders as an IGR and social compact which emphasises shared understanding of the space, agreement on priorities, common vision, measurable outcomes, realistic targets and commitments. This plan is meant to be jointly developed and agreed to by all spheres of government. The development and approval of the One Plan involves a series of collaborative intergovernmental planning sessions reflecting on research, evidence and solutions for the 52 developmental spaces.

Following the successful launch of the DDM, the honourable President, Cyril Ramaphosa assigned Ministers and Deputy Ministers to different districts as District Champions whose role is: • To provide strategic guidance for the development and implementation of the One Plan. • To contribute towards the institutional stabilisation of the allocated district and the reprioritisation process that seeks to respond to urgent institutional and governance gaps, and urgent development priorities outlined in the specific district profile. • To facilitate the District wide adoption of the One Plan through the various Inter–Governmental Relations Structures (IGR), including its sign off and implementation. To work in collaboration with line Ministries and provide support to unblock and bring to the surface any