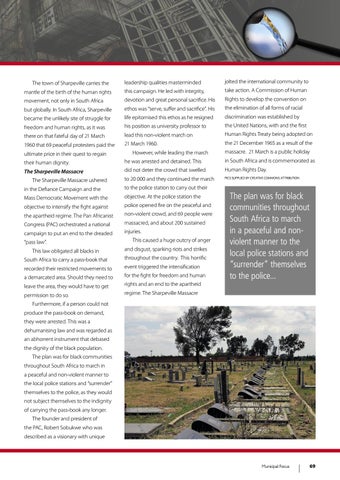 jolted the international community to

mantle of the birth of the human rights

this campaign. He led with integrity,

take action. A Commission of Human

movement, not only in South Africa

devotion and great personal sacrifice. His

Rights to develop the convention on

but globally. In South Africa, Sharpeville

ethos was “serve, suffer and sacrifice”. His

the elimination of all forms of racial

became the unlikely site of struggle for

life epitomised this ethos as he resigned

discrimination was established by

freedom and human rights, as it was

his position as university professor to

the United Nations, with and the first

there on that fateful day of 21 March

lead this non-violent march on

Human Rights Treaty being adopted on

1960 that 69 peaceful protesters paid the

The town of Sharpeville carries the

ultimate price in their quest to regain

However, while leading the march

massacre. 21 March is a public holiday

he was arrested and detained. This

in South Africa and is commemorated as

did not deter the crowd that swelled

The Sharpeville Massacre ushered in the Defiance Campaign and the

to the police station to carry out their

Mass Democratic Movement with the

objective. At the police station the

objective to intensify the fight against

police opened fire on the peaceful and

the apartheid regime. The Pan Africanist

non-violent crowd, and 69 people were

massacred, and about 200 sustained

campaign to put an end to the dreaded

This caused a huge outcry of anger

This law obligated all blacks in

and disgust, sparking riots and strikes

South Africa to carry a pass-book that

throughout the country. This horrific

recorded their restricted movements to

a demarcated area. Should they need to

for the fight for freedom and human

leave the area, they would have to get

rights and an end to the apartheid

permission to do so.

The plan was for black communities throughout South Africa to march in a peaceful and nonviolent manner to the local police stations and “surrender” themselves to the police...

Furthermore, if a person could not produce the pass-book on demand, they were arrested. This was a dehumanising law and was regarded as an abhorrent instrument that debased the dignity of the black population. The plan was for black communities throughout South Africa to march in a peaceful and non-violent manner to the local police stations and “surrender” themselves to the police, as they would not subject themselves to the indignity of carrying the pass-book any longer. The founder and president of the PAC, Robert Sobukwe who was described as a visionary with unique