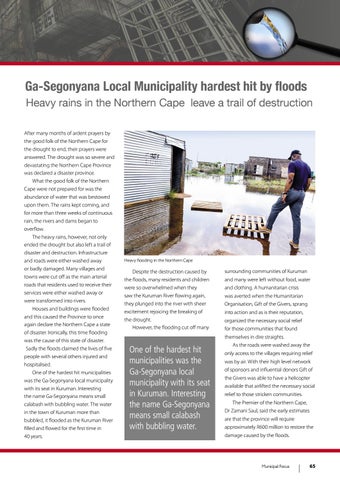 Heavy rains in the Northern Cape leave a trail of destruction

After many months of ardent prayers by the good folk of the Northern Cape for the drought to end, their prayers were answered. The drought was so severe and devastating the Northern Cape Province was declared a disaster province. What the good folk of the Northern Cape were not prepared for was the abundance of water that was bestowed upon them. The rains kept coming, and for more than three weeks of continuous rain, the rivers and dams began to overflow. The heavy rains, however, not only ended the drought but also left a trail of disaster and destruction. Infrastructure and roads were either washed away or badly damaged. Many villages and towns were cut off as the main arterial roads that residents used to receive their services were either washed away or were transformed into rivers. Houses and buildings were flooded and this caused the Province to once again declare the Northern Cape a state of disaster. Ironically, this time flooding was the cause of this state of disaster. Sadly the floods claimed the lives of five people with several others injured and hospitalised. One of the hardest hit municipalities was the Ga-Segonyana local municipality with its seat in Kuruman. Interesting the name Ga-Segonyana means small calabash with bubbling water. The water in the town of Kuruman more than bubbled, it flooded as the Kuruman River filled and flowed for the first time in 40 years.

Heavy flooding in the Northern Cape

Despite the destruction caused by the floods, many residents and children were so overwhelmed when they saw the Kuruman River flowing again, they plunged into the river with sheer excitement rejoicing the breaking of the drought. However, the flooding cut off many

surrounding communities of Kuruman and many were left without food, water and clothing. A humanitarian crisis was averted when the Humanitarian Organisation, Gift of the Givers, sprang into action and as is their reputation, organized the necessary social relief for those communities that found themselves in dire straights.

As the roads were washed away the only access to the villages requiring relief was by air. With their high level network of sponsors and influential donors Gift of the Givers was able to have a helicopter available that airlifted the necessary social relief to those stricken communities. The Premier of the Northern Cape, Dr Zamani Saul, said the early estimates are that the province will require approximately R600 million to restore the damage caused by the floods.