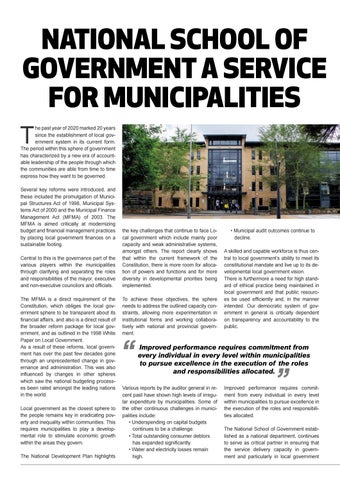 NATIONAL SCHOOL OF GOVERNMENT A SERVICE FOR MUNICIPALITIES T

he past year of 2020 marked 20 years since the establishment of local government system in its current form. The period within this sphere of government has characterized by a new era of accountable leadership of the people through which the communities are able from time to time express how they want to be governed. Several key reforms were introduced, and these included the promulgation of Municipal Structures Act of 1998, Municipal Systems Act of 2000 and the Municipal Finance Management Act (MFMA) of 2003. The MFMA is aimed critically at modernizing budget and financial management practices by placing local government finances on a sustainable footing. Central to this is the governance part of the various players within the municipalities through clarifying and separating the roles and responsibilities of the mayor, executive and non-executive councilors and officials. The MFMA is a direct requirement of the Constitution, which obliges the local government sphere to be transparent about its financial affairs, and also is a direct result of the broader reform package for local government, and as outlined in the 1998 White Paper on Local Government. As a result of these reforms, local government has over the past few decades gone through an unprecedented change in governance and administration. This was also influenced by changes in other spheres which saw the national budgeting processes been rated amongst the leading nations in the world. Local government as the closest sphere to the people remains key in eradicating poverty and inequality within communities. This requires municipalities to play a developmental role to stimulate economic growth within the areas they govern. The National Development Plan highlights

the key challenges that continue to face Local government which include mainly poor capacity and weak administrative systems, amongst others. The report clearly shows that within the current framework of the Constitution, there is more room for allocation of powers and functions and for more diversity in developmental priorities being implemented. To achieve these objectives, the sphere needs to address the outlined capacity constraints, allowing more experimentation in institutional forms and working collaboratively with national and provincial government.

• Municipal audit outcomes continue to decline. A skilled and capable workforce is thus central to local government’s ability to meet its constitutional mandate and live up to its developmental local government vision. There is furthermore a need for high standard of ethical practice being maintained in local government and that public resources be used efficiently and, in the manner intended. Our democratic system of government in general is critically dependent on transparency and accountability to the public.

Improved performance requires commitment from every individual in every level within municipalities to pursue excellence in the execution of the roles and responsibilities allocated. Various reports by the auditor general in recent past have shown high levels of irregular expenditure by municipalities. Some of the other continuous challenges in municipalities include: • Underspending on capital budgets continues to be a challenge. • Total outstanding consumer debtors has expanded significantly. • Water and electricity losses remain high.

Improved performance requires commitment from every individual in every level within municipalities to pursue excellence in the execution of the roles and responsibilities allocated. The National School of Government established as a national department, continues to serve as critical partner in ensuring that the service delivery capacity in government and particularly in local government