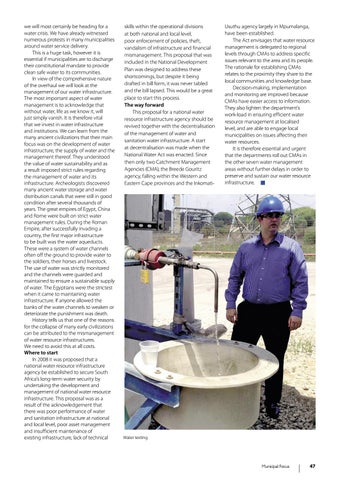 we will most certainly be heading for a water crisis. We have already witnessed numerous protests in many municipalities around water service delivery. This is a huge task, however it is essential if municipalities are to discharge their constitutional mandate to provide clean safe water to its communities. In view of the comprehensive nature of the overhaul we will look at the management of our water infrastructure. The most important aspect of water management is to acknowledge that without water, life as we know it, will just simply vanish. It is therefore vital that we invest in water infrastructure and institutions. We can learn from the many ancient civilizations that their main focus was on the development of water infrastructure, the supply of water and the management thereof. They understood the value of water sustainability and as a result imposed strict rules regarding the management of water and its infrastructure. Archeologists discovered many ancient water storage and water distribution canals that were still in good condition after several thousands of years. The great empires of Egypt, China and Rome were built on strict water management rules. During the Roman Empire, after successfully invading a country, the first major infrastructure to be built was the water aqueducts. These were a system of water channels often off the ground to provide water to the soldiers, their horses and livestock. The use of water was strictly monitored and the channels were guarded and maintained to ensure a sustainable supply of water. The Egyptians were the strictest when it came to maintaining water infrastructure. If anyone allowed the banks of the water channels to weaken or deteriorate the punishment was death. History tells us that one of the reasons for the collapse of many early civilizations can be attributed to the mismanagement of water resource infrastructures. We need to avoid this at all costs. Where to start In 2008 it was proposed that a national water resource infrastructure agency be established to secure South Africa’s long-term water security by undertaking the development and management of national water resource infrastructure. This proposal was as a result of the acknowledgement that there was poor performance of water and sanitation infrastructure at national and local level, poor asset management and insufficient maintenance of existing infrastructure, lack of technical

skills within the operational divisions at both national and local level, poor enforcement of policies, theft, vandalism of infrastructure and financial mismanagement. This proposal that was included in the National Development Plan was designed to address these shortcomings, but despite it being drafted in bill form, it was never tabled and the bill lapsed. This would be a great place to start this process. The way forward This proposal for a national water resource infrastructure agency should be revived together with the decentralisation of the management of water and sanitation water infrastructure. A start at decentralisation was made when the National Water Act was enacted. Since then only two Catchment Management Agencies (CMA), the Breede Gouritz agency, falling within the Western and Eastern Cape provinces and the Inkomati-

Usuthu agency largely in Mpumalanga, have been established. The Act envisages that water resource management is delegated to regional levels through CMAs to address specific issues relevant to the area and its people. The rationale for establishing CMAs relates to the proximity they share to the local communities and knowledge base. Decision-making, implementation and monitoring are improved because CMAs have easier access to information. They also lighten the department’s work-load in ensuring efficient water resource management at localised level, and are able to engage local municipalities on issues affecting their water resources. It is therefore essential and urgent that the departments roll out CMAs in the other seven water management areas without further delays in order to preserve and sustain our water resource infrastructure.