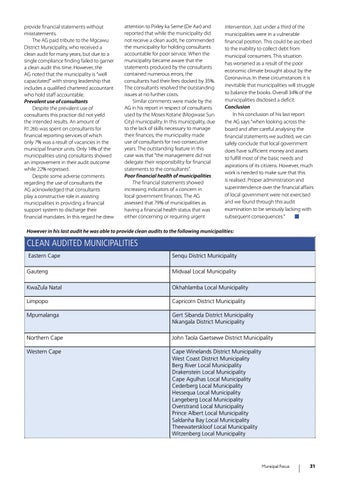 provide financial statements without misstatements. The AG paid tribute to the Mgcawu District Municipality, who received a clean audit for many years, but due to a single compliance finding failed to garner a clean audit this time. However, the AG noted that the municipality is “well capacitated” with strong leadership that includes a qualified chartered accountant who hold staff accountable. Prevalent use of consultants Despite the prevalent use of consultants this practice did not yield the intended results. An amount of R1.26b was spent on consultants for financial reporting services of which only 7% was a result of vacancies in the municipal finance units. Only 14% of the municipalities using consultants showed an improvement in their audit outcome while 22% regressed. Despite some adverse comments regarding the use of consultants the AG acknowledged that consultants play a constructive role in assisting municipalities in providing a financial support system to discharge their financial mandates. In this regard he drew

intervention. Just under a third of the municipalities were in a vulnerable financial position. This could be ascribed to the inability to collect debt from municipal consumers. This situation has worsened as a result of the poor economic climate brought about by the Coronavirus. In these circumstances it is inevitable that municipalities will struggle to balance the books. Overall 34% of the municipalities disclosed a deficit. Conclusion In his conclusion of his last report the AG says “when looking across the board and after careful analysing the financial statements we audited, we can safely conclude that local government does have sufficient money and assets to fulfill most of the basic needs and aspirations of its citizens. However, much work is needed to make sure that this is realised. Proper administration and superintendence over the financial affairs of local government were not exercised and we found through this audit examination to be seriously lacking with subsequent consequences.”

However in his last audit he was able to provide clean audits to the following municipalities: