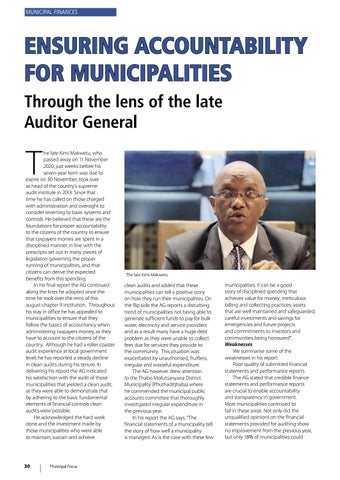 he late Kimi Makwetu, who passed away on 11 November 2020, just weeks before his seven-year term was due to expire on 30 November, took over as head of the country’s supreme audit institute in 2013. Since that time he has called on those charged with administration and oversight to consider reverting to basic systems and controls. He believed that these are the foundations for proper accountability to the citizens of the country to ensure that taxpayers monies are spent in a disciplined manner, in line with the prescripts set out in many pieces of legislation governing the proper running of municipalities, and that citizens can derive the expected benefits from this spending. In his final report the AG continued along the lines he adopted since the time he took over the reins of this august chapter 9 institution. Throughout his stay in office he has appealed to municipalities to ensure that they follow the basics of accountancy when administering taxpayers money, as they have to account to the citizens of the country. Although he had a roller coaster audit experience at local government level, he has reported a steady decline in clean audits during his tenure. In delivering his report the AG indicated his satisfaction with the audit of those municipalities that yielded a clean audit, as they were able to demonstrate that by adhering to the basic fundamental elements of financial controls clean audits were possible. He acknowledged the hard work done and the investment made by those municipalities who were able to maintain, sustain and achieve

clean audits and added that these municipalities can tell a positive story on how they run their municipalities. On the flip side the AG reports a disturbing trend of municipalities not being able to generate sufficient funds to pay for bulk water, electricity and service providers and as a result many have a huge debt problem as they were unable to collect fees due for services they provide to the community. This situation was exacerbated by unauthorised, fruitless, irregular and wasteful expenditure. The AG however drew attention to the Thabo Mofutsanyana District Municipality (Phuthaditjhaba) where he commended the municipal public accounts committee that thoroughly investigated irregular expenditure in the previous year. In his report the AG says, “The financial statements of a municipality tell the story of how well a municipality is managed. As is the case with these few

municipalities, it can be a good story of disciplined spending that achieves value for money; meticulous billing and collecting practices; assets that are well maintained and safeguarded; careful investments and savings for emergencies and future projects and commitments to investors and communities being honoured”. Weaknesses We summarise some of the weaknesses in his report: Poor quality of submitted financial statements and performance reports. The AG stated that credible finance statements and performance reports are crucial to enable accountability and transparency in government. Most municipalities continued to fail in these areas. Not only did the unqualified opinions on the financial statements provided for auditing show no improvement from the previous year, but only 18% of municipalities could