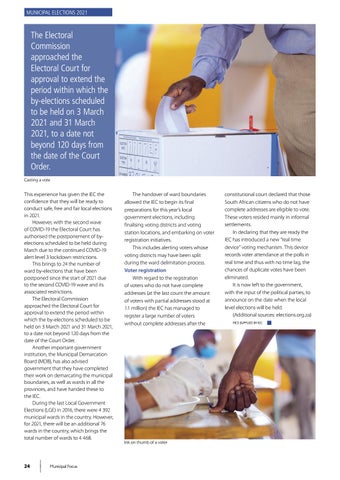 The Electoral Commission approached the Electoral Court for approval to extend the period within which the by-elections scheduled to be held on 3 March 2021 and 31 March 2021, to a date not beyond 120 days from the date of the Court Order. Casting a vote

This experience has given the IEC the confidence that they will be ready to conduct safe, free and fair local elections in 2021. However, with the second wave of COVID-19 the Electoral Court has authorised the postponement of byelections scheduled to be held during March due to the continued COVID-19 alert level 3 lockdown restrictions. This brings to 24 the number of ward by-elections that have been postponed since the start of 2021 due to the second COVID-19 wave and its associated restrictions. The Electoral Commission approached the Electoral Court for approval to extend the period within which the by-elections scheduled to be held on 3 March 2021 and 31 March 2021, to a date not beyond 120 days from the date of the Court Order. Another important government institution, the Municipal Demarcation Board (MDB), has also advised government that they have completed their work on demarcating the municipal boundaries, as well as wards in all the provinces, and have handed these to the IEC. During the last Local Government Elections (LGE) in 2016, there were 4 392 municipal wards in the country. However, for 2021, there will be an additional 76 wards in the country, which brings the total number of wards to 4 468.

The handover of ward boundaries allowed the IEC to begin its final preparations for this year’s local government elections, including finalising voting districts and voting station locations, and embarking on voter registration initiatives. This includes alerting voters whose voting districts may have been split during the ward delimitation process. Voter registration With regard to the registration of voters who do not have complete addresses (at the last count the amount of voters with partial addresses stood at 1.1 million) the IEC has managed to register a large number of voters without complete addresses after the

Ink on thumb of a voter

constitutional court declared that those South African citizens who do not have complete addresses are eligible to vote. These voters resided mainly in informal settlements. In declaring that they are ready the IEC has introduced a new “real time device” voting mechanism. This device records voter attendance at the polls in real time and thus with no time lag, the chances of duplicate votes have been eliminated. It is now left to the government, with the input of the political parties, to announce on the date when the local level elections will be held. (Additional sources: elections.org.za) PICS SUPPLIED BY IEC