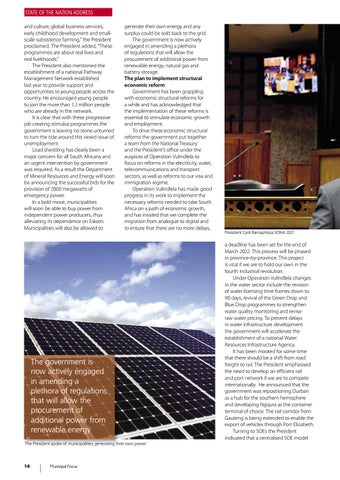 STATE OF THE NATION ADDRESS and culture, global business services, early childhood development and smallscale subsistence farming,” the President proclaimed. The President added, “These programmes are about real lives and real livelihoods.” The President also mentioned the establishment of a national Pathway Management Network established last year to provide support and opportunities to young people across the country. He encouraged young people to join the more than 1.2 million people who are already in the network. It is clear that with these progressive job creating stimulus programmes the government is leaving no stone unturned to turn the tide around this vexed issue of unemployment. Load shedding has clearly been a major concern for all South Africans and an urgent intervention by government was required. As a result the Department of Mineral Resources and Energy will soon be announcing the successful bids for the provision of 2000 megawatts of emergency power. In a bold move, municipalities will soon be able to buy power from independent power producers, thus alleviating its dependence on Eskom. Municipalities will also be allowed to

generate their own energy and any surplus could be sold back to the grid. The government is now actively engaged in amending a plethora of regulations that will allow the procurement of additional power from renewable energy, natural gas and battery storage. The plan to implement structural economic reform Government has been grappling with economic structural reforms for a while and has acknowledged that the implementation of these reforms is essential to stimulate economic growth and employment. To drive these economic structural reforms the government put together a team from the National Treasury and the President’s office under the auspices of Operation Vulindlela to focus on reforms in the electricity, water, telecommunications and transport sectors, as well as reforms to our visa and immigration regime. Operation Vulindlela has made good progress in its work to implement the necessary reforms needed to take South Africa on a path of economic growth, and has insisted that we complete the migration from analogue to digital and to ensure that there are no more delays,

a deadline has been set for the end of March 2022. This process will be phased in province-by-province. This project is vital if we are to hold our own in the fourth industrial revolution. Under Operation Vulindlela changes in the water sector include the revision of water licensing time frames down to 90 days, revival of the Green Drop and Blue Drop programmes to strengthen water quality monitoring and revise raw water pricing. To prevent delays in water infrastructure development the government will accelerate the establishment of a national Water Resources Infrastructure Agency. It has been mooted for some time that there should be a shift from road freight to rail. The President emphasised the need to develop an efficient rail and port network if we are to compete internationally. He announced that the government was repositioning Durban as a hub for the southern hemisphere and developing Ngqura as the container terminal of choice. The rail corridor from Gauteng is being extended to enable the export of vehicles through Port Elizabeth. Turning to SOEs the President indicated that a centralised SOE model